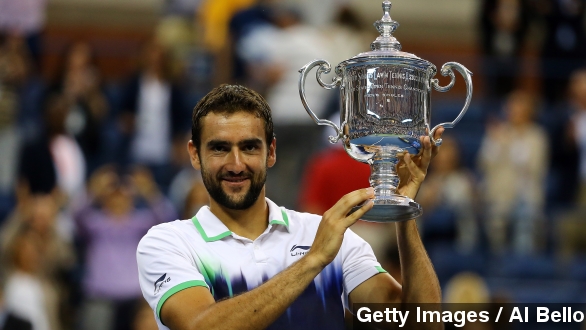 In what could go down as the most the improbable Gland Slam final in recent years, fourteenth seed Marin Cilic defeated tenth-ranked Kei Nishikori to win the U.S. Open Men's Championship.

Despite losing their previous three encounters, Cilic made up for it with a big one. The power-serving Croatian swept Nishikori in straight sets to win the Men's Singles Championship.

Just how rare was this final? Well, the odds were roughly 200-1 for each player winning it all before the tournament was in full swing.

It's also the first time since the 2005 Australian Open none of the three big household tennis names made it to the final: Novak Djokovic, Roger Federer and Rafael Nadal were all noticeably absent from the championship match.

But that's not to say this was a gift from the tennis gods to two lesser-known players. Both Cilic and Nishikori faced some stiff competition in earlier rounds.

For Marin Cilic — what a difference a year makes! He was suspended for four months last year after traces of a "banned stimulant" were found in his system after a drug test. That caused him to miss last year's U.S. Open.

The Croatian's coach, the great Goran Ivanišević, said, “It was not [an] easy time. He was angry. ... We were practicing one week, stopped two weeks. Then practice another week, then what are we practicing for?"

Well, Cilic certainly bounced back at this year's Open.

He went on to not only beat Roger Federer, but dominate him with a quick victory in straight sets to move into the finals where he pretty much did the same thing to Nishikori.

Not to be completely outdone, Nisihikori made considerable gains in the tournament.

The Asian pro knocked off three of the top five players in the world: Milos Raonic, Stan Wawrinka and, of course, the big stunner, the number one player in the world, Novak Djokovic.

In doing so, Nishikori became the first Japanese tennis player in history to make it to a Grand Slam final. It's worth noting Nishikori also won his previous encounter with Djokovic in 2011 and beat Roger Federer just this past May.

A writer for Sports Illustrated says "Special Kei"'s success has a lot to do with his new coach, former tennis star Michael Chang, "who convinced Nishikori he belongs and taught him how to believe."

And, it looks like Nishikori has put that training to good use. That jumping volley sure does look pretty similar to Chang's circa 1989.

With his victory, Marin Cilic became the first Croatian player to win a Grand Slam title since his coach, Goran Ivanisevic, captured the Wimbledon trophy in 2001.