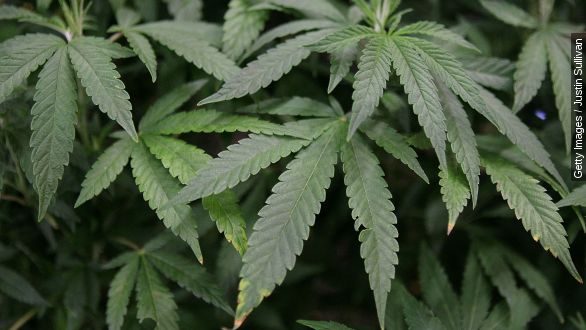 By Erik Shute
March 25, 2014
The American Academy of Neurology released new guidelines with some evidence marijuana in pill and oral spray forms can help curb symptoms of MS.
SHOW TRANSCRIPT

"New guidelines suggest that those with MS would benefit from taking medical marijuana in a pill or oral spray. ... Those with MS who use the drug may feel less pain and see other symptoms reduced." (Via WBTV)

Those guidelines are from the American Academy of Neurology. Specifically, pill and oral spray forms of cannabis can help curb common MS symptoms like muscle stiffness and frequent urination. The study concluded smoking marijuana had no significant effect on the symptoms, either.

However, doctors like Harvard Assistant Professor Pushpa ​Narayanaswami stress there is not enough evidence to show the medicinal drug can change the course of the disease.

On top of that, he and many experts warn the side effects of using marijuana — like seizure, dizziness and depression — are still a hazard and are amplified by onset MS. The assistant professor told Everyday Health:

"I don't think that any physician treating multiple sclerosis will decide that these forms of marijuana would be the first-line agents … because we do know that there are significant side effects."

And he's likely right. Marijuana falls into a category of treatments called CAM therapies, or complementary and alternative medicine. Los Angeles Times says 80 percent of MS patients seek these treatments simply because there are so few options available.

According to Fox News, researchers with the American Academy of Neurology created the new guidelines after reviewing 2,608 studies on CAM therapies, among them pill and oral spray marijuana.

Bloomberg lists the other treatments reviewed in the study, which were also linked to helping MS patients.

--Ginkgo biloba might reduce tiredness, but does not help thinking and memory issues.

--Magnetic therapy. Patients lie on a mat with electronic magnetic feeds, which relaxes muscles but does not help with a patient's depression.

--And reflexology is another option that's proved positive results. (Via Bloomberg)

It's legal in 20 states for doctors to prescribe patients medicinal marijuana. Cannabis in pill form is available in the U.S. So is marijuana oral spray, but it is not regulated by the FDA, so users might not know what they're getting.