Spanish Prime Minister Forced Out Of Office In No-Confidence Vote 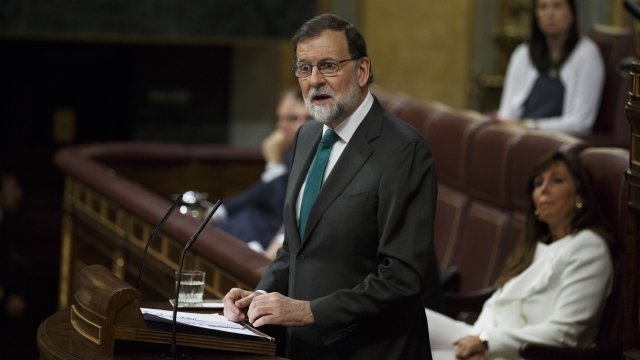 SMS
Spanish Prime Minister Forced Out Of Office In No-Confidence Vote
By Ethan Weston
By Ethan Weston
June 1, 2018
Rajoy faced the no-confidence vote after a corruption scandal within his party.
SHOW TRANSCRIPT

Mariano Rajoy is no longer Spain's prime minister after he was forced out of the office by a no-confidence vote.

Pedro Sánchez, the leader of the country's Socialist Party, is set to take Rajoy's place. Sanchez originally filed the motion of no-confidence against Rajoy after a corruption scandal within Rajoy's Popular Party.

Spain's constitution hands over power to the party that brings a no-confidence vote against a sitting prime minister should that vote succeed.

Sánchez's tenure in the position might not last long. The Socialists only hold 84 of the 350 seats in Parliament, and Sanchez's government is tentatively held together by an alliance of far-left and regional parties. If that falls apart, there will likely be an election.

That adds to the already uncertain political climate in southern Europe, where Italy is set to form a coalition government run by two parties skeptical of the European Union.