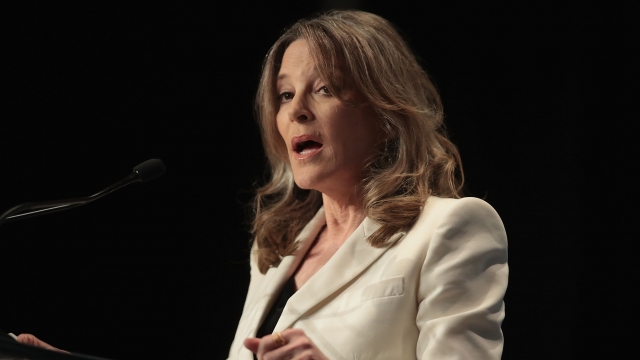 SMS
Marianne Williamson Ends Presidential Bid
By Ahmed Jawadi
By Ahmed Jawadi
January 10, 2020
The best-selling author had struggled to gain more than 1% support in the polls since beginning her campaign in early 2019.
SHOW TRANSCRIPT

Best-selling author Marianne Williamson has ended her bid to be the next president.

Williamson's political career began in 2014 when she ran as an independent to represent California's 33rd Congressional District. She lost, but in early 2019 she formally announced her candidacy for the Democratic presidential nomination. Despite securing a spot in the first two Democratic primary debates, she failed to meet the requirements for every subsequent one. And while Williamson was the most-Googled candidate after the second debate, she couldn't break more than 1% support in various national polls throughout her campaign.

Williamson made the announcement shortly after she was forced to lay off her entire campaign staff due to financial issues, according to sources close to the campaign.