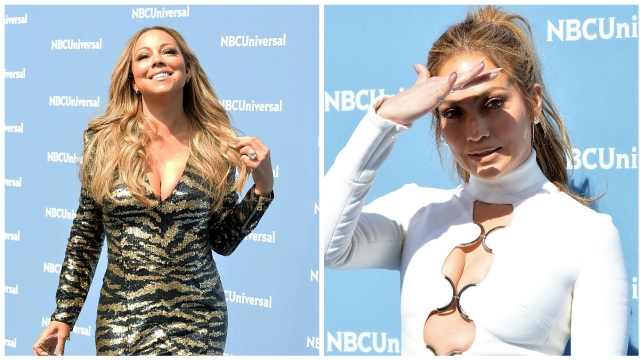 SMS
Mariah Carey Throwing Shade At Jennifer Lopez: A History
By Cody LaGrow
By Cody LaGrow
May 18, 2016
It's a diva duel for the ages.
SHOW TRANSCRIPT

It's a diva duel for the ages. Entering the ring donning sequins and sass is Mariah Carey. She's been throwing shade at Jennifer Lopez for years — claiming she doesn't know who J. Lo is.

It all started here. This GIF's origin dates back to an early 2000s interview when Carey was asked what she thinks about Lopez. She responded with, "I don't know her."

And not knowing J. Lo in the early 2000s meant not knowing the woman who made us all want to wear pepto-colored velour tracksuits or that she was totally snubbed for an Oscar for her work in "The Wedding Planner."

But apparently Mariah Carey wasn't a part of the entire generation that smelled like Glow by J. Lo. Carey claimed to remain ignorant of Lopez through the years despite their similar careers — including being "American Idol" judges and now having a Las Vegas residency.

Carey reminded us there was pot to stir in a 2015 interview where she praised a fan who wore a T-shirt with her famous "I don't know her" quote and again to TMZ a few months later.

"What do you think of people referencing, 'I don't know her,' all these years later?" TMZ asked.

Lopez shared a different side of the sing-off with Wendy Williams when she explained who she scoped out in Vegas before she started her own show.

"I didn't see Mariah because at the time, she wasn't playing," Lopez shared.

"Who? No, I'm playing. That's what Mariah said about Jennifer one time," Williams joked.

"She does say that. She's forgetful, I guess," Lopez said.

"Do you know each other?" Andy Cohen asked.

"She says you know her."

So, the shade saga continues. Honestly, it just sounds like these two aren't friends. But as my show choir teacher once said, a duet is the first step in friendship.