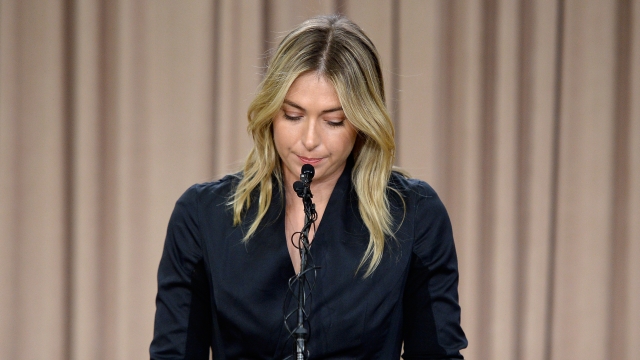 Maria Sharapova shocked the tennis world when she held a press conference Monday to say that she had failed a drug test earlier this year.

"A few days ago, I received a letter from the ITF that I had failed a drug test at the Australian Open. I did fail the test, and I take full responsibility for it," Sharapova said at a press conference.

Sharapova went on to explain she had been taking a drug called Mildronate for a decade. Mildronate, also known as Meldonium, was added to the World Anti-Doping Agency's list of banned substances in 2016.

Meldonium is used to treat ischemia or a lack of blood flow. But in athletic competitions, the National Center for Biotechnology Information says the drug provides "an increase in endurance performance of athletes, improved rehabilitation after exercise, protection against stress, and enhanced activations of central nervous system (CNS) functions."

Increased endurance and rehabilitation certainly sounds like a competitive advantage, but Sharapova has been plagued by arm and shoulder injuries recently, playing just three tournament in the past eight months.

So there likely was a legitimate medical use for the Meldonium to help Sharapova rehab her injuries, but it's still a banned substance, and there could be huge ramifications for the five-time Grand Slam winner.

Sharapova has been provisionally suspended by the International Tennis Federation. Experts predict the ban could last for one or maybe even two years, which could force her to miss the 2016 Olympics and other major tournaments.

Before the press conference started, plenty of outlets speculated Sharapova would announce her retirement, but the tennis star said she hopes to get another chance to play in the future.

This video includes clips from Maria Sharapova, Nike, Grindeks AS and images from Getty Images.