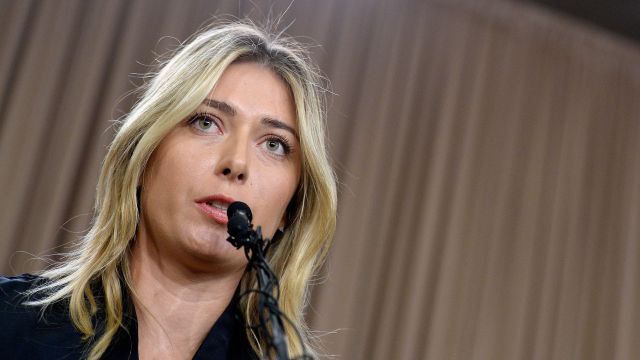 "A few days ago I received a letter from the ITF that I had failed a drug test at the Australian Open. I did fail the test, and I take full responsibility for it," Sharapova said during a press conference.

Nike has announced it will suspend its sponsorship with her "while the investigation continues." The company is reportedly her most lucrative sponsor.

Swiss watchmaker TAG Heuer, whose sponsorship deal with Sharapova ran out at the end of 2015, said negotiations on a new deal are being tabled after the announcement.

These sponsorship dollars are big deals for athletes who aren't getting massive dollars from team contracts.

Sharapova still has several sponsorship deals on the table that have yet to announce their decisions. Still, Sharapova isn't the only Olympic athlete to have sponsors drop out amid controversy.

In 2012, sponsors left cyclist Lance Armstrong after evidence surfaced of him doping.

Despite the positive drug test at the Australian Open, Sharapova says she still plans to travel and compete in the 2016 Summer Olympics in Rio de Janiero.

This video includes clips from HEAD Tennis, Evian, OWN / "Oprah's Next Chapter," and NBC Sports and images from Getty Images.