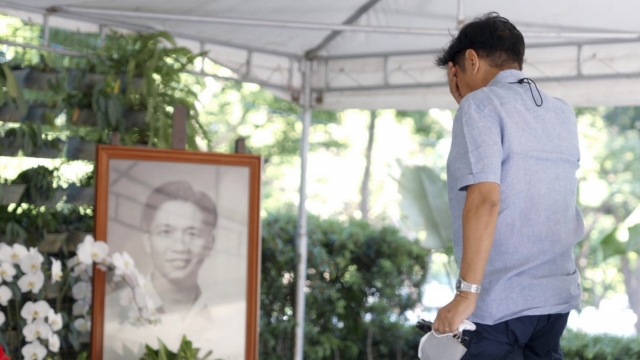 Ferdinand Marcos Jr., the namesake son of an ousted Philippine dictator, declared victory Wednesday in this week's presidential election and faced early calls to ensure respect for human rights, the rule of law and democracy.

Marcos Jr. garnered more than 31 million votes in an unofficial vote count from Monday's polls in what's projected to be one of the strongest mandates for a Philippine president in decades. His vice-presidential running mate, Sara Duterte, appeared to have also won by a landslide.

Marcos Jr.'s electoral triumph is a victory for democracy and he promised to seek common ground across the political divide, his spokesman, Vic Rodriguez, said.

"To the world: Judge me not by my ancestors, but by my actions," Rodriguez quoted Marcos Jr. as saying.

The separately elected president and vice president will take office on June 30 after the results are confirmed by Congress. With a single, six-year term, they are poised to lead a Southeast Asian nation in dire need of economic recovery following two years of COVID-19 outbreaks and lockdowns. They'll also inherit huge expectations for a way out of crushing poverty, gaping inequalities, ending Muslim and communist insurgencies and political divisions, which were only inflamed by the turbulent presidencies of their fathers.

"As a boxer and an athlete, I know how to accept defeat," Pacquiao said in a video message. "But I hope that even if I lost in this fight, my fellow Filipinos who are wallowing in poverty were a winner too."

The United States, a longtime treaty ally of the Philippines, was among the first foreign governments to issue a comment following the elections. It expressed willingness to work with the next Filipino president after an official proclamation but stressed the relationship should be grounded on respect for human rights and the rule of law.

"We look forward to renewing our special partnership and to working with the next administration on key human rights and regional priorities," U.S. State Department spokesman Ned Price said.

He cited Washington's long alliance with Manila "that shares democratic values and interests," and added that the U.S. government would continue "to promote respect for human rights and the rule of law which is fundamental to U.S. relations with the Philippines and in other bilateral contexts."

Price sidestepped the question if the U.S. has any concern with the apparent victory of Marcos Jr. He said the elections and subsequent vote count followed international standards without any major incident.

China congratulated the "leading candidates" and the Philippines for the smooth conduct of the elections. Beijing said it will continue to work with Manila "to stay committed to good neighborliness and friendship, focus on post-COVID growth, expand win-win cooperation and bring more tangible benefits to both peoples."

Marcos Jr. has said he wants to pursue closer ties with China, as did outgoing President Rodrigo Duterte, who at the end ended up relying on the U.S. military alliance despite initial misgivings as Beijing showed no willingness to compromise on its vast territorial claims in the South China Sea on the Philippines' doorstep.

The election outcome was an astonishing reversal of the army-backed but largely peaceful "People Power" uprising that ousted Marcos's father in 1986 — a democratic triumph in an Asian region considered a human rights hotspot where authoritarian regimes flourish.

Marcos Jr. has steadfastly defended his father's legacy and refused to apologize for the massive human rights violations and plunder under his rule. He visited his father's grave at the national heroes' cemetery on Tuesday, laying flowers and, at one point, appearing overcome with emotions.

He and Sarah Duterte, the daughter of Rodrigo Duterte, campaigned on a platform of national unity without saying how they would heal the wounds that have festered since their fathers' presidencies.

The 64-year-old former provincial governor, congressman and senator has kept mum on key political, economic and foreign policy issues, including how he would address calls for the prosecution of President Duterte, who oversaw a bloody anti-drugs campaign that alarmed the international community and sparked an investigation by the International Criminal Court.

More hardline left-wing groups and survivors of the Marcos dictatorship rejected Marcos Jr. and Sara Duterte outright, accusing them of whitewashing their fathers' legacies on the campaign trail and in social media propaganda.

"Our generation has shown that even the most ruthless tyrant can be defeated by the people's collective action," said SELDA, a group of ex-political detainees and human rights victims in the martial-law era under the late dictator. "Now is the time to harness that power again - the power to change the course of history and reject this nefarious pair of traditional politicians."