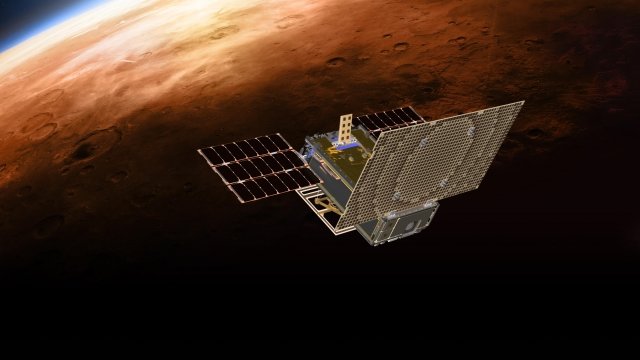 SMS
Tiny CubeSats Sent Word Of InSight's Landing All The Way From Mars
By Evan Thomas
By Evan Thomas
November 26, 2018
It takes about eight minutes to hear from probes on Mars. NASA's InSight mission carried special CubeSats that sent immediate updates on its landing.
SHOW TRANSCRIPT

Mars is an average 49 million miles from Earth — so far that sometimes mission runners don't know if probes survive their landing until hours after the actual touchdown. But NASA's most recent InSight mission used some special tools to make communication much faster.

The MarCO mission is a pair of roughly backpack-sized CubeSats that separated from the main spacecraft shortly after InSight launched. They followed behind InSight as it approached Mars, watched its landing from orbit and relayed its status back to Earth.

Mission engineers called it "a giant leap for CubeSats" because the tiny spacecraft have never tackled an interplanetary mission before. But they did their job, and they did it in about eight minutes — far faster than NASA's other tools might have.

If MarCO hadn't been there, InSight's arrival would only have been monitored by spacecraft already in orbit around Mars, like the Mars Reconnaissance Orbiter. But those messages could be delayed for several hours if MRO has to orbit out from behind Mars to line up a message for Earth. 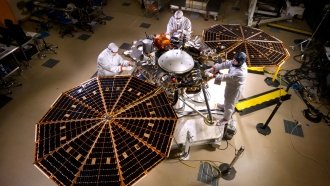 MarCO cut that delay back down to little more than the time it takes radio signals to cover the distance to Earth. NASA says this is a promising sign for any number of future missions to remote destinations. Sending some CubeSats along for the ride could give probes a cost-effective way to phone home about as fast as possible.