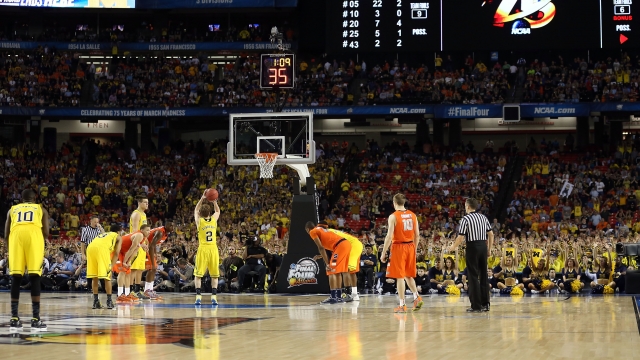 You might've heard of the "dome effect," which argues that basketball players don't shoot as well in giant stadiums. But is it really true?

This year's Final Four will, once again, be played in a domed football stadium, and fans are worried that the cavernous environment could hurt teams' shooting. But the jury's still out on whether this notion holds any water.

The story usually goes like this: Shooters are supposedly influenced by the area behind the basket. If the backdrop's further away, like in a dome, it might be harder to size up exactly where the rim is, and harder to hit the shot.

The poster child for this theory is the 2011 national title game, held in the same stadium as this year's Final Four, NRG Stadium in Houston. That year, runner-up Butler shot an awful 18.8 percent from the field but still only lost by 12.

And there's not a lot of hard evidence to support that domes actually affect teams' shooting percentages.

An analysis from FiveThirtyEight found any drop in field goal shooting is more to do with defense than anything else. This makes sense because games in giant stadiums are usually in the later rounds of March Madness, where teams are tougher to beat.

On the other hand, the study says that of all the domed arenas March Madness has visited, NRG Stadium has been one of the toughest on teams' shooting.

Basketball analytics expert Ken Pomeroy put NRG to the test during last year's NCAA tournament and found teams playing there shot only about 32 percent from the 3-point line.

Pomeroy acknowledges his sample size is small, but he  points out "if a team shot 32.2 percent over 30 games, you'd be pretty convinced they weren't a very good shooting team."

Whether "the dome effect" is real or not, there is one place where it's definitely showing up: the betting window. According to The New York Times, Las Vegas bookmakers are docking Final Four point totals by about 4 because of the games' venue.

This video includes clips from the NCAA, Syracuse Athletics and Villanova University and images from Getty Images.