The Federal Government Missed The March 5 DACA Deadline ... Now What? 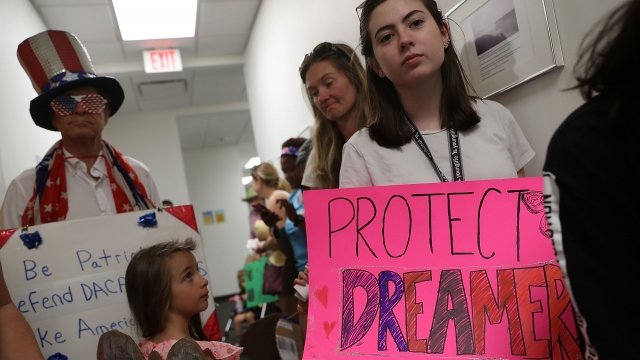 The president's original deadline to roll back DACA was March 5, but multiple court challenges have delayed the date the program would end.

President Donald Trump's deadline to act on the Deferred Action for Childhood Arrivals program was supposed to be Monday — but that doesn't really matter anymore.

Trump said in September that Congress had until March 5 to come up with a solution to keep DACA recipients from being deported.

But Trump's deadline was tossed out after multiple court challenges, leaving lawmakers and so-called Dreamers unsure of what will happen now.

Here's the timeline so far: Trump said in September he would end the Obama-era program. But that same month, lawsuits were filed, saying ending the program impedes the due process rights of DACA recipients.

In January, a federal judge blocked the order and said DACA renewal applications had to still be accepted. In February, another federal judge temporarily barred the program from ending.

Now, current DACA recipients can renew their applications, but new ones aren't being accepted. So despite Trump's initial deadline, the future for DACA is still unclear.