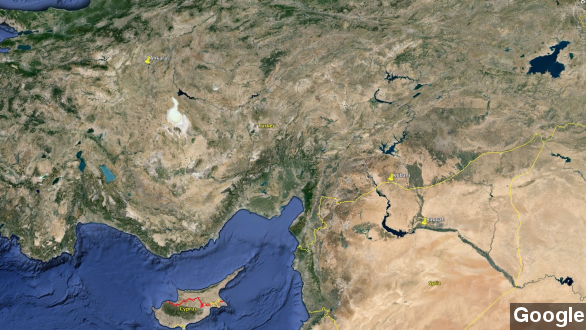 The ISIS campaign might have, for the first time, crossed the border into Turkey. The Syrian border town of Kobani has been under siege from the Islamic State of Iraq and Syria since September. (Maps via Google)

But according to Al Jazeera, over the weekend, Kurdish officials there reported something new: an attack that came not from the ISIS-controlled areas south, east and west of the city, but from the north: the Turkish side. (Video via Al Jazeera)

Syria's largest Kurdish political party, along with the Syrian Observatory for Human Rights, says an Islamic radical set off a suicide bomb at the border crossing into Turkey. Later Saturday, ISIS fighters brought in tanks from the southwest to back up its fighters on foot.

Turkey's government doesn't want Kurdish independence, and it's taken criticism for not helping Kurdish troops fighting ISIS on its border. This weekend saw a new accusation from Kurdish politicians and activists: that Turkey was actively supporting and coordinating with ISIS militants.

Turkey does arm some rebel groups, which it hopes will topple Syrian President Bashar al-Assad's government. (Video via The Guardian)

But in Turkey's capital, Ankara, not 400 miles northwest of Kobani, there was a strong denial of any support for ISIS.

Actually, President Recep Tayyip Erdogan's government denied that the suicide attack even came from the Turkish side, saying the story was "definitely a lie." (Video via Council on Foreign Relations)

Elsewhere in Ankara, Pope Francis called on Turkey to take new steps against religious extremism and condemned ISIS for its violence and medieval ideology.

"I would like to iterate moreover, that the problem cannot be resolved solely through a military response," Pope Francis said.

Back in Syria, American-led airstrikes reportedly targeted the de facto ISIS capital of Raqqa. The Syrian Observatory for Human Rights says up to 30 airstrikes hit the city on Sunday.

In September, the U.S. expanded its anti-ISIS bombing campaign in Iraq to Syria. The air strikes over the weekend focused especially on a Syrian army base ISIS captured in July. (Video via U.S. Central Command)

Syria's civil war has been ongoing for almost four years. The United Nations says about 200,000 have been killed in the fighting and as many as 5 million displaced.