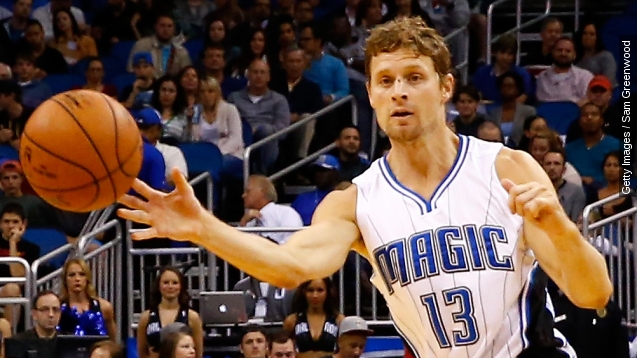 NBA guard Luke Ridnour has been on the move — or his contract has, anyway.

"Luke, do you know what team you're with now?," sports broadcaster Dan Patrick said.

"This morning, I think I'm with the [Toronto] Raptors," Ridnour said.

Correction: WAS with the Raptors.

This offseason's human hot potato was a member of five teams within a little over two weeks. His journey so far can be a little mind-boggling, so here's a recap of his not-so-excellent adventure.

June 24: Ridnour is traded from the Orlando Magic to the Memphis Grizzlies for draft rights to Janis Timma, who was born the same year the Chicago Bulls won their second straight NBA Finals championship — 1992.

June 25: This must've been a hectic day. The Grizzlies traded Ridnour to the Charlotte Hornets, who then traded him to the Oklahoma City Thunder. Including the Magic, this comes out to four teams within 24 hours.

June 30: The Thunder send Ridnour up north — way up north — to the Toronto Raptors. Which is where Ridnour stayed until he was professionally homeless. The Raptors dumped him July 9.

Although Ridnour's contract has traveled more than 3,000 miles among teams, he's been relaxing.

"I've stayed at home. We live outside of Seattle, so, summertime, this is where we're at. ... To be honest, this has been pretty funny for us, too," Ridnour said.

The 12-year NBA veteran said he's open to moving his family to play for a good team — if the opportunity is right — or just hanging it up. Either way, there's still time for more trades.

"If you can get traded five times in a week ... what do you think can happen in the next four months?" sports broadcaster Doug Gottlieb said.

This video includes images from Getty Images, Ray Villalobos / CC by 2.0, Jspotts,  and music from Nicholas Cheung / CC BY NC SA 3.0 and Cletus Got Shot / CC BY NC SA 4.0.

Correction: A previous version of this video said the Chicago Bulls won their third consecutive NBA Championship in 1992. It was the team's second consecutive championship. This video has been updated.