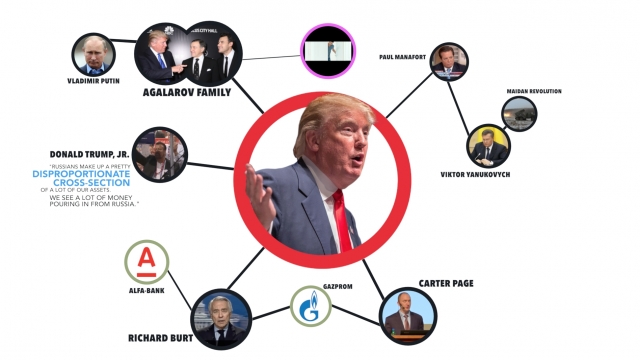 Donald Trump's campaign advisers have money in Russian gas and finance companies, and concealed records might be hiding his own possible ties.

Donald Trump has surrounded himself with dubious connections to Vladimir Putin's Russia. That includes his campaign manager Paul Manafort, who led Kremlin candidate Viktor Yanukovych to power in Ukraine and ensured Russian influence in eastern Europe. Yanukovych, who's currently in exile in Russia, set off Ukraine's 2014 Maidan Revolution when his crackdown killed 100 protesters in Kiev. His adviser is now Trump's adviser.

SEE MORE: Ted Cruz's Trump Snub: On Twitter Vs. On The Convention Floor

Trump’s foreign policy adviser on Russia has shares in Moscow's state-controlled gas company. A foreign policy speechwriter for Trump has money in that same state gas company and is on the board of Russia's largest private bank.

Trump himself has claimed vast business dealings in Russia, and his son said publicly: "Russians make up a pretty disproportionate cross-section of a lot of our assets. We see a lot of money pouring in from Russia."

For one, Trump had a joint real estate project with the Agalarov family — who are close friends of Putin and who receive a lot of state-funded contracts. The youngest Agalarov is an aspiring pop star who even featured Trump in one of his music videos.

But all the state-owned Russian companies with Trump's staff and friends on their payroll are only operated through blessing from Putin's inner-circle. And in the past few years, Putin has quietly funnelled millions of dollars to politicians who might destabilize the West and be friendlier toward Russia. That includes an $11.7 million loan from a Kremlin-controlled bank to the party of France’s far-right Marine Le Pen. In Greece, Putin's government is suspected of funding the Golden Dawn, one of Europe’s most violent far-right parties. This is something American officials are actively watching.

There's nothing to show that kind of funding for Trump's effort. But we do know there's a great mutual admiration between Putin and Trump. That's despite Putin's record of jailing and poisoning political opponents and killing journalists critical of his government.

Trump's policies are friendlier toward Russia than anything from either major party since the fall of the Soviet Union. He says he'd reorient NATO away from defending against Russia, and with input from Manafort — his Russia-friendly campaign manager — he gutted the Republican platform plank opposing Russia in Ukraine, which would allow continued occupation of Crimea.

All the while, Putin's propaganda machine, the state-funded RT, or Russia Today, has tried to spread pro-Trump messaging in the U.S. and internationally.

Until Trump follows the lead of every American nominee for president, we won't know the personal, professional and financial connections he and his organization have with Putin's government and Russia.

But numbers do tell us one thing for sure: Of all the countries polled on the U.S. presidential candidates, only one favored Trump — and it shouldn't be a surprise.