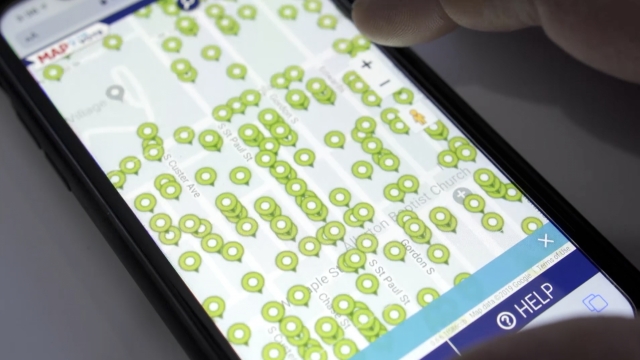 "They may be in the back or something. Let's get this las door over here, said Shameka Parrish-Wright. --Hi, is your mom home?"

Shameka Parrish-Wright has been knocking on doors on behalf of politicians for more than a decade.

"Will you be voting on November 5th? I am excited."

But now she is knocking on them for herself -- as a first-time candidate for a seat on the school board. And she's relying on a new tool she hopes will both register new voters and increase her chances of winning.

"How have you used Map The Vote so far?"

"I went on and I signed up. And I was like, let me be curious," Parrish-Wright said. "Let me put in my address and see who around me is a registered voter or not. And then all these dots started popping up and was like, whoa, there's somebody right across the street or somebody I talked to the other day. They have someone that needs to be registered in their home. And I was like, oh, we can definitely take this."

Map The Vote founders say they've created the first online application that helps canvassers specifically target unregistered voters. Using publicly available info like property records and details gathered from a voter database. Users are able to find most of these potential voters on a map on their phone or digital device. Those people can then sign people up to vote using the Register2Vote part of the site.

Kentucky is just the second place the technology is being tested on the ground ahead of the state's off year governor's race.

Co-creators Jeremy Smith and Madeline Eden say they wanted to make it easier for people to register to vote in their home state of Texas ahead of the 2018 midterms. The Lone Star State has one of the lowest voter turnout rates in the nation and is one of at least several states without online voter registration -- which studies show has an impact on voter turnout.

"Texas doesn't have online voter registration so it makes it a lot harder for people to get registered to vote," said Jeremy Smith. "There [are] more hurdles, but our tools work particularly well for those states."

Similar digital platforms are available to large political organizations but those tools are focused on voters who are already signed up to vote. Register2Vote creators who made the application say this goes beyond that by tapping into a potential pool of entirely new voters.. While the system isn't perfect at identifying every unregistered voter the creators say with time it will get better as more people begin to use it. Smith also says the site is focused on privacy and only allows users to see addresses, not names.

And more testing on the ground is key to increase accuracy and voter turnout ahead of the 2020 election.

Buckner has trained people to use the tool including Parrish-Wright ahead of Kentucky's 2019 election. *She's one of over 4,000 trained users from more than 200 organizations across 47 states.* And while anyone, Republican or Democrat, can use the site, the majority users and efforts are focused on progressive leaning voters. Some Democratic presidential candidates have even expressed an interest in the application. Organizers hope to register two million new voters ahead of 2020.

"So we're trying to invest and expand the electorate," Buckner added. "Focusing on the new American majority, which is unmarried women, young people and people of color."

"You're hoping that you can use this tool to not only impact voters and have them register for the process, but in fact, win your race, right, I mean that's part of it for you too?"

"Yes. That is definitely it," Parrish-Wright said. "I want more people to feel encouraged and be out there. I'm driving people to the polls every election day no matter what."