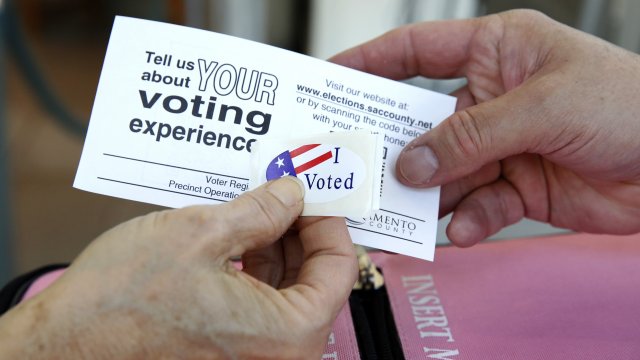 A recent report found Gen-Zers and Millennials are energized to vote by mail this fall, but more than half lack the resources to do so.

The youngest Americans are set to make up the largest share of the 2020 electorate — about 37% will be Millennials and Gen-Zers.

"If we show up, we determine the election," said Alex Leichenger, strategic communications manager at NextGen America, a progressive non-profit focused on mobilizing young voters.

But the coronavirus could threaten turnout.

To reduce the health risks posed by the pandemic, nearly every state has expanded access to absentee and mail-in voting. But young people may still struggle to make their voices heard at the ballot box. More than half of voters under the age of 35 say they lack the resources to vote-by-mail.

A recent report by the progressive NextGen found 46% do not have access to a printer if they need to print a ballot application and more than half don't know how to get a mail-in ballot or the ballot deadlines in their state.

Voters of every age face these challenges, but experts say they can be more of a problem for those without experience casting a ballot.

But even for Democrats, engaging young voters can be challenging, especially those who are non-white and low-income, who may face even more barriers to casting a ballot.

Still, young voters in the survey say they are more motivated to vote this fall than in any prior election. And NextGen, focused on promoting youth voter engagement, is eager to capitalize on that enthusiasm. The group texted absentee voting information to 3.7 million people across 11 battleground states in August as part of its first-ever "National vote-by-mail day."

"What we have found in our research and just in talking with young voters for a long time is, basically, that for this election, they're really excited and fired up to vote and the motivation levels are really high," explained Leichenger. "The key thing is just making sure that they know the steps of the process in order to cast a ballot."