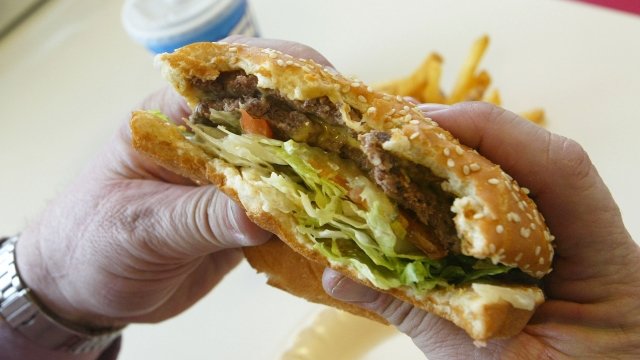 Nearly every major fast-food burger joint in the country has received a failing grade in regard to their antibiotics policies.

An annual consumer report published Wednesday grilled the nation's top 25 fast-food chains over their policies of buying beef raised on antibiotics. It also looked at how those policies are implemented and how transparent they are about their progress in reducing antibiotics in their meat.

Of the 25 restaurants tested, 22 got burned. Restaurants that failed to cut the mustard included McDonald's, Sonic, Hardee's, and Five Guys. Wendy's fared slightly better with a D-minus, while Shake Shack and BurgerFi were the only ones to get an A for serving antibiotic-free beef.

Farmers have been feeding their livestock antibiotics for decades, saying it's to keep the animals healthy. But research shows the overuse of antibiotics in the food industry has led to an increase of antibiotic-resistant germs, which kill tens of thousands of people in the U.S. each year.

Many major poultry companies have either reduced or straight-up halted the use of antibiotics in their products in the last few years, but beef has seemingly failed to catch up.

The FDA revealed last month its five-year plan to curb the use of antimicrobials in food-producing animals. This includes using the drugs only when necessary and under the oversight of licensed veterinarians.