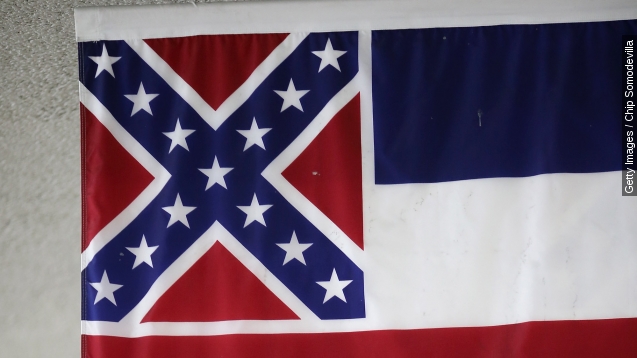 As details continue to emerge about Dylann Roof, who shot and killed nine people in a Charleston, South Carolina, church, another issue that runs deep in the history of South Carolina has taken center stage.

"It was not always flown in South Carolina at the capitol building. It was actually first raised in 1962 as a defiant response to civil rights," said East Anglia University professor Sarah Churchwell.

"What do you see when you see the Confederate flag flying?" asked Elaine Quijano.

The Confederate flag is viewed by many as offensive and a symbol of hate, but there are other flags with similar ties to the confederacy that are not being examined as closely.

A prime example comes from Maryland, where the white and red portions of the state flag are associated with Confederate supporters in the state. The Crossland Banner, arms of the Crossland family, were worn on Confederate uniforms during the civil war by Marylanders who fought for the Confederacy.

Georgia also had the Confederate battle flag flying over its state capitol as recently as 2001. Similarly to the confederate flag being raised in South Carolina, Georgia added the rebel flag to its official state flag in 1956 during the height of racial integration and just two years after the historic Brown v. Board of Education decision.

It has since been changed to the First National Flag of the Confederacy, also known as the Stars and Bars, with the Georgia state seal in the middle.

As it stands, there is a proposal in the South Carolina legislature to remove the rebel flag from statehouse grounds and put it in a museum.