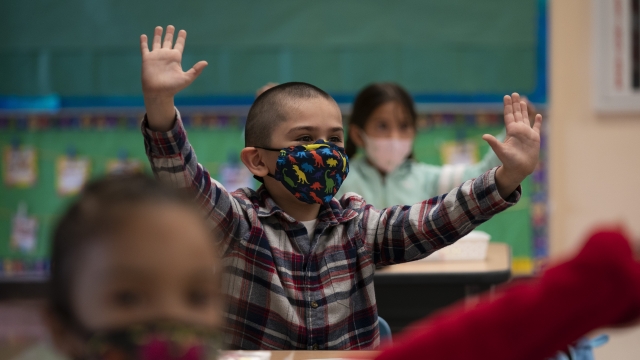 SMS
COVID Vaccine OK'd For Younger Kids, But Many Parents Still Skeptical
By Lindsey Theis
By Lindsey Theis
November 3, 2021
Fifteen million doses of kids' vaccines are set to arrive at thousands of sites across the country.

It was April when 9-year-old Alejandra Gerardo, one of the first participants in Pfizer's kid's vaccine clinical trial, got a shot.

Now, it's coming to millions of children her age.

CDC Director Dr. Rochelle Walensky has signed off on Pfizer's vaccine for 5- to 11-year-olds.

"It is our ongoing responsibility to make sure as many people as possible are vaccinated and protected from COVID-19," Walensky said.

It comes at a time when 2 out of 3 parents plan to get their child a COVID vaccine. But only about a quarter say they'll do it right away, according to a recent survey by the Kaiser Family Foundation. Many parents are still skeptical.

"I wouldn't give my kids any of the vaccines, Pfizer or any of them, Johnson & Johnson, none of them," Shannon Sherwood said. "I don't think it's good for the kids."

"We're in great shape on supply, and the whole plan is based on Pfizer vaccines, so we have more than enough vaccine for every child 5 to 11 — specifically the Pfizer vaccine," White House COVID Response Coordinator Jeffrey Zients said.

Doctors advise parents to give themselves extra time and provide distractions and rewards for the kids, especially ones who are scared of needles.

"Bravery is having something scary and still doing it, so you can kind of freak out. You can cry a bit that doesn't make you less brave because you still did it," pediatric hospitalist Dr. Sharon Stoolman said.

The Pfizer mRNA shot is about 90% effective at preventing symptomatic infection in kids. The findings are from a clinical trial of more than 4,000 elementary-age children. It's a third of the adult dose — 10 micrograms — and it's given three weeks apart, each time, a shot to the shoulder muscle.

One concern about mRNA shots has been heart inflammation, or myocarditis.

Moderna is holding off on asking the FDA for emergency approval of its mRNA shot for kids after countries like Japan and Sweden raised the alarm about the issue in young men.

"We know that the teenagers, the adolescents, they were more likely to have it. It's still very rare but as we move down the chain in terms of age, we're going to be looking very closely at that," Mayo Clinic's vaccine research co-director Dr. Rick Kennedy said.

While Alejandra Gerardo has been fully vaccinated for a while, those joining her now will be fully vaccinated by Christmas. A holiday that, thanks to vaccinations and natural immunity, may look closer to normal.

"As long as there's not another variant that sort of mirrors Delta, I would expect that the rates will remain low and that this holiday season could look very different than the last holiday season," Dr. Karl Minges said.

Some health departments and providers are taking the rest of this week as an opportunity for health and vaccine education, deciding to start vaccines at the beginning of next week because given that 21 days apart between the first and second dose, there's some concern that people will miss that second dose because of the Thanksgiving holiday.