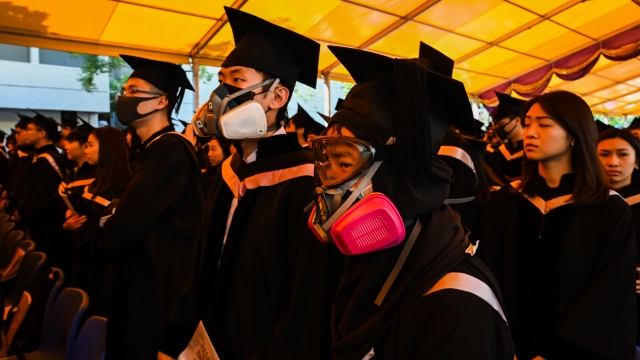 SMS
Many Hong Kong Protesters Abandon Camp At University
By LeeAnne Lowry
By LeeAnne Lowry
November 15, 2019
It's not clear why so many people left the camp, but China recently warned that protesters were "on the edge of doom" and should "walk away."
SHOW TRANSCRIPT

Protesters in Hong Kong who had set up camp at a major university began to leave campus Friday, according to The Associated Press.

About 1,000 protesters set up heavily fortified camps at five campuses across the territory this week. Some protesters are reportedly building and stockpiling weapons. Several major universities have shortened semesters or held classes online.

On Friday morning, some protesters at Chinese University of Hong Kong temporarily cleared a road they had blocked and gave the government 24 hours to commit to holding local elections on Nov. 24. While the road was open, most protesters left the campus — but it's not clear why. After the 24-hour deadline passed, the few protesters remaining on the campus blocked the road again.

The government deployed workers to clear the road and it was reopened.

The head of the university published an open letter Friday asking all protesters to leave. He said the school might have to ask the government to step in if they stayed.

On Monday, Chinese state media warned protesters they're "on the edge of doom" and that they should "walk away as soon as possible when you can still make the call."