Many 2020 Dems Say They Back Reparations — But What Does It Mean? 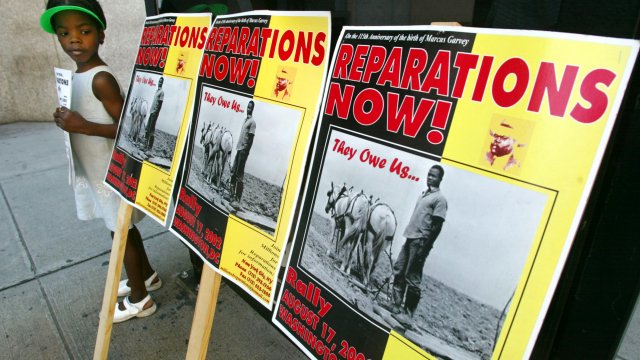 SMS
Many 2020 Dems Say They Back Reparations — But What Does It Mean?
By Ben Schamisso
By Ben Schamisso
March 21, 2019
Many candidates have embraced the renewed attention on reparations, but none have explicitly endorsed cash transfers to the descendants of slaves.
SHOW TRANSCRIPT

2020 Democratic presidential candidates are not shying away from the conversation about reparations for descendants of slaves and those who lived in the Jim Crow era.

Former U.S. Secretary of Housing and Urban Development Julian Castro: "This country should resolve the original sin of slavery, and one of the ways we should consider doing that is through reparations."

U.S. Sen. Kamala Harris: "We had over 200 years of slavery. We had Jim Crow for almost a century. … We have got to recognize that and … give folks a lift up."

Even entertaining the idea is a pretty big departure from recent years. In 2016, President Barack Obama, Hillary Clinton and Bernie Sanders all said policies to uplift all Americans would be more practical than specific reparations for black Americans. That's also long been the mainstream political view on the issue.

"American presidents from Bill Clinton to George Bush to Barack Obama liked to talk about 'a rising tide lifts all boats,' and they liked to talk about how they were able to lower joblessness in the black community or raise incomes. But it's interesting that they never talk about raising it to parity with white people."

Now, most current Democratic candidates have talked about the impact of centuries of slavery and racist laws that have contributed to today’s inequalities. But none have explicitly endorsed direct compensation to the descendants of slaves. Political science professor Alvin Tillery says the discussion is important nonetheless.

"If we don't get to … fully fleshed-out policy proposals in this campaign, then perhaps we will if one of them wins the White House, and perhaps we will in the next campaign. Change is always incremental, and I'm happy to see where we're headed."

"It's not just the fact that the labor of enslaved blacks made this country rich. ... But it's when the government comes along in the late 19th century and suppresses African-Americans and simultaneously subsidizes the lives of white people. ... And one of the big drivers of the disparities was cash transfers to white veterans coming back after World War II, the GI Bill. … The problem, if you're African-American, is that the military was segregated. So you could not even get in to then get those GI Bill benefits when you came home. So direct cash transfers to white people is what has made this gap, and I think direct cash transfers to black people is what has the potential to fix it."

Now, critics say determining who qualifies for compensation and who doesn't would be a difficult task.

But Tillery has a plan.

"It's not just about benefits accruing to a race or a skin color. It's about benefits accruing to the victims of racist policies. And so that's where we can easily draw those lines. So if you're an African immigrant who comes to Washington, D.C., or Atlanta in 1955, and you live in segregated America, and your children go to segregated schools, then you qualify for reparations, in my view. If you're a post-1985 immigrant — as 95 percent of African immigrants are — then you don't qualify."

Other tough questions about implementing reparations include, "How much would it cost?"

Tillery: "I don't know. I mean, you know, a trillion dollars?"

And how it would be funded?

Tillery admits that a major obstacle to reparations is the country's growing debt, which is currently at $22 trillion. But he says funding is possible by reducing the $640 billion defense budget and adopting what he calls a "fairer tax system." He wants lawmakers to at least explore those options.

"We'd have to do just like we do with any other policy debate: We'd have to have congressional hearings with testimony. We can talk to some of the innovators, like the president of Georgetown University that's trying to put in place these kinds of programs, you know, economists. There are all kinds of ways we can figure out … the right approach."

Several recent polls show that a majority of black voters and an increasing number of millennials support reparations. According to Tillery, that's precisely why Democrats are becoming more open to the idea.

"Six to seven out of 10 African-Americans believe reparations is a good policy. And so, you know, if you're going to win the Democratic nomination, you've got to deal with black voters. ...  I think a big part of it is generational change. As the baby boomer generation that was raised almost their entire lives in a segregated society dies off [and] is replaced by millennials and Gen Z voters, you see a shift in the composition of white voters who are much more honest about the inequalities that shape our society."

At the same time, these polls also show that white Americans still overwhelmingly reject the idea. As a result, some observers say Democrats could alienate swing voters by focusing on "non-starters" such as abolishing ICE and reparations. Tillery acknowledges the political risk but also believes the Democratic Party shouldn't ignore a growing segment of its voters.

"The model Democratic voter is a person of color or a young white person who lives in a city. The question of 'will the center-right, white male voters living in flyover country, are they going to vote Democratic again?' I don't think they will. They're Republican voters. ... Change is incremental, and we can only get to the right outcomes through debate and struggle and by continuing to put forward policy."