Manning Proves Setting An All-Time Record Happens Past Your Prime 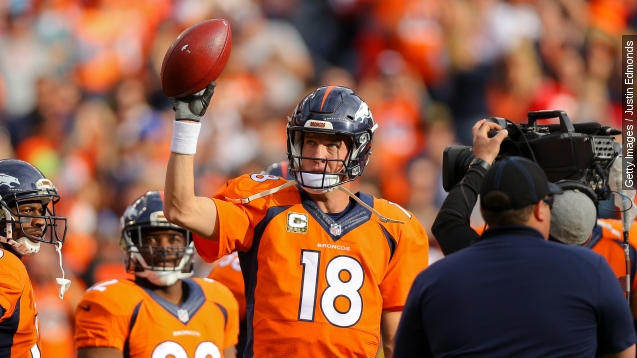 SMS
Manning Proves Setting An All-Time Record Happens Past Your Prime
By Grant Suneson
By Grant Suneson
November 15, 2015
Manning set the NFL record for most career passing yards, but that's about all that went right for him. He was benched after throwing four picks.
SHOW TRANSCRIPT

Peyton Manning had a moment he’ll always remember on a day he’d probably like to forget. The Broncos quarterback eclipsed Brett Favre to become the NFL’s all time leader in passing yards during one of the worst games of his life. (Video via Nationwide Insurance)

The future hall-of-famer completed just five of his 20 passing attempts. He threw almost as many passes to the opposing Kansas City Chiefs, totaling four interceptions before he was benched in the third quarter.

For someone to break career records in any sport, they’re going to have to play for a long time. And if you play for long enough, you’ll usually pass your prime. Peyton Manning is far from the first athlete to chase history with his best years behind him.

Brett Favre was only able to add 2500 yards to his record in his final season with the Vikings in 2010. He recorded career lows in touchdowns, yards and yards per game. Which makes sense, considering he was 41 at the time.

When Emmitt Smith broke the NFL’s all time rushing yards record in 2002 he was 33 years old, practically a dinosaur for a running back.

That season he failed to rush for 1000 yards for the first time since his rookie year. It only got worse from there, as he finished his career with two lackluster seasons as a Cardinal.

And Father Time can humble athletes from any sport.

Baseball's all-time greatest slugger Barry Bonds slowed down considerably after the age of 40 during his pursuit of Hank Aaron’s record of 755 home runs. (Video via Charles Schwab)

He missed almost all of the 2005 season with injuries and hit 26 and 28 home runs the next two years. Which isn’t bad, until you consider that he averaged more than 40 a year for the 13 seasons before that.

So one bad game won’t tarnish Manning’s legacy. But games like today make it obvious that our days of watching number 18 break records are certainly numbered.