Manhunt Continues For Man Who Shot 10 People On NYC Subway 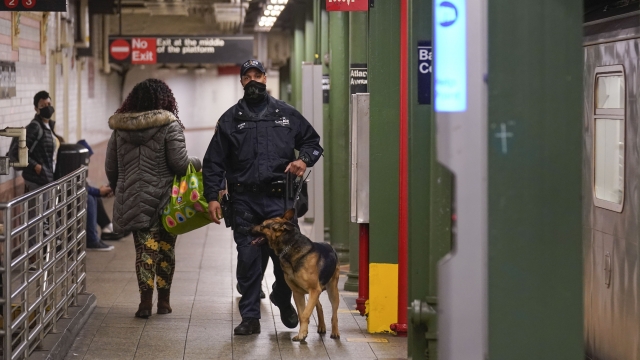 It was a chaotic Tuesday morning in Brooklyn.

The NYPD says as subway riders approached the 36th Street station in Sunset Park, a man dressed in a grey sweatshirt and a green construction vest put on what appeared to be a gas mask and pulled out a canister. Moments later, the train car filled with smoke and the man opened fire. A witness told Newsy what happened next.

"I start to see white smoke filling up the subway car behind us and I see people crowded against the door banging on it screaming and all we can do is watch and eventually the train does stop," New York resident Alex Vasquez said. "People are tripping over each other. People are running over each other. There's blood on the ground."

When the shooting stopped, 10 people had been hit. Though, miraculously, their injuries were not believed to be life threatening. As many as two dozen people may have been injured. The police commissioner says they don't know the man's motive at this point.

"No known explosives on trains and its not being considered a terrorist incident," New York City Police Commissioner Keechant Sewell said.

The ripple effect was felt through the entire community. All schools in the area put in a "shelter in place" status for the entire day. Malika Kim walks to pick up her son from school. But her 14-year-old daughter rides the subway every day to get to school— something that's now giving her pause.

"Going to school and having independence is part of being an older kid so it absolutely concerns me getting from point A to point B," Kim said.

The NYPD says they are still looking for the gunman and those who were in the area say they want him caught, and the police to be more visible in smaller stations like this one.