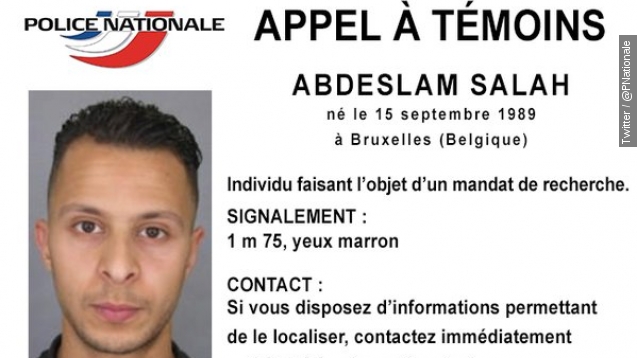 SMS
Manhunt Underway For Eighth Suspect In Paris Attacks
By Melissa Prax
By Melissa Prax
November 15, 2015
An investigation into the Paris terrorist attacks has led to several arrests across Europe, and authorities are now searching for an eighth attacker.
SHOW TRANSCRIPT

A manhunt is currently underway for an eighth assailant that authorities believe might have fled after the Paris terrorist attacks that left 129 people dead and more than 350 injured.

Authorities are looking for Salah Abdeslam, 26, whom they believe is directly involved with Friday's attack in a Paris concert hall.

On Sunday, the European Commission president said there was no need to be fearful of refugees. He said, "Those who organized these attacks and those that perpetrated them are exactly those that the refugees are fleeing."

This comes after Poland announced it was pulling out of the EU's plan to resettle Syrian refugees across Europe, after unconfirmed speculation that one of the terrorists might have crossed into Europe with other refugees. (Video via United Nations High Commissioner for Refugees)

Officials did find a Syrian passport near the body of a terrorist at the Stade de France. Greek officials have confirmed that the passport entered Greece a few months back, though French officials have not confirmed whom it belongs to.

An Egyptian passport was also found near the stadium, but it belonged to a victim, not an attacker.

On Saturday, the mayor of the French town of Chartres named one of the seven known attackers as Ismael Omar Mostefai, a 29-year-old French national of Algerian descent who apparently lived in Chartres until at least 2012. Mostefai grew up in the poor neighborhood of Courcouronnes, a suburb south of Paris.

At least six people close to Mostefai have been taken into custody by French officials, including his father and brother. His brother said he did not suspect him being a terrorist but also said they had not spoken in several years.

Belgian authorities have detained seven people in connection to the attacks. Officials also say two of the attackers who died in Paris were French nationals living in Brussels, and investigators suspect the attacks may have been at least partially plotted in Belgium.

French prosecutor Francois Molins laid out a rough timeline of how the attacks unfolded: He described three coordinated teams who separately carried out a series of shootings, attempted bombings at a stadium and the bloody attack on the concert at Bataclan.

ISIS has claimed credit for the attacks, saying they are retaliation for the French airstrikes against the terrorist group in Iraq and Syria.

This video includes images from Getty Images and Godefroy / CC by SA 3.0.