Public Service Bonds Us Beyond Identity and Politics 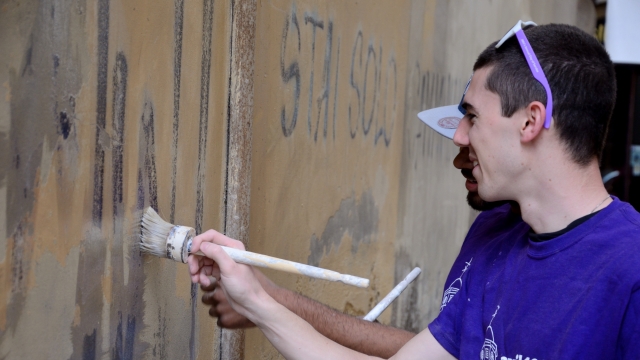 America's always been a patchwork quilt of ideas and backgrounds. But the fabric feels frayed. How can we come together? It's a noble goal, with no easy answer. Some have suggested national service could help — maybe compulsory, maybe voluntary.

It would be a shared experience among all races, ethnic groups, rich and poor, rural and urban — with a common purpose. Maybe it's serving meals to elderly people. Or working at the Red Cross. Supporters point to the cultural bonding for U.S. military members.

For instance, World War II broke down certain barriers, producing the "greatest generation." A sense of what it meant to be American. A shared sense of belonging in the armed forces grew again in 1948, as desegregation came to the military several decades before some parts of the country.

All are service members. All dedicated to one mission. It doesn't take a uniform to form deep bonds, though.

A famous study, called "Robbers Cave" from the '50s put about two dozen boys in a summer camp, split into two groups.

There was nothing different about the groups, except they were split up. They spontaneously gave themselves names (Rattlers and Eagles) and flags and grew hostile to the other group of nearly-identical boys.

They made threats and lobbed insults. After a few weeks, the scientists surreptitiously set common goals like pulling a car out of ditch. Suddenly, the fights stopped, bonds formed, and by the end of the summer, they were one united group.

Could that lesson work in our societies?

An overarching cultural bond is the goal of French President Emmanuel Macron pushing for community service in his country.

The mission is to "encourage the participation and commitment of every young person in the life of the nation, to value citizenship and the feeling of belonging to a community gathered around its values, to strengthen social cohesion and boost the republican melting pot."

They found that shared experiences:

— Tear down individual differences, allowing members to focus on the whole.

Unsurprisingly, there's a political debate here. It hinges in part on whether compulsory national service would undermine volunteerism. Also, whether coercive service is democratic.

Macron's gotten pushback. Surely, the U.S. would be the same. The issue seems to come down to this: Every quilt needs binding, otherwise it falls apart. Countries and cultures are no different.

What can bring us together? Placing a focus on shared values instead of being Rattlers and Eagles?