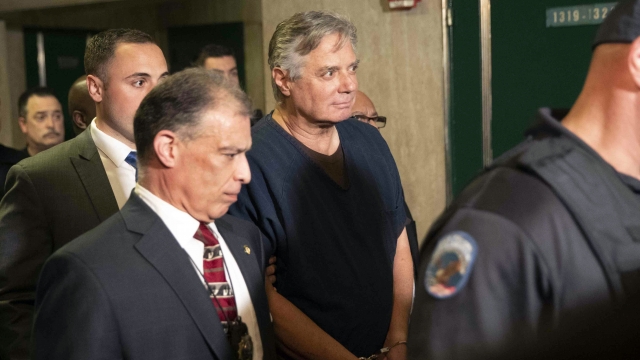 SMS
Manafort Released To Home Confinement Amid COVID-19 Pandemic
By Katherine Biek
By Katherine Biek
May 13, 2020
Paul Manafort's been serving out his seven-and-a-half-year sentence for conspiracy and fraud at a federal prison in Pennsylvania.
SHOW TRANSCRIPT

Paul Manafort has been released from prison and transferred to home confinement, according to ABC. Newsy reached out to Manafort's lawyer, but has yet to hear back.

The former Trump campaign chairman has been serving out his seven-and-a-half-year sentence for conspiracy and fraud at a federal prison in Pennsylvania.

Manafort's release comes a month after his legal team asked the Federal Bureau of Prisons to transfer their client to home confinement, arguing the 71-year-old "is at a high risk of contracting COVID-19 ... due to his age and pre-existing health conditions," including liver disease and respiratory problems.

They also pointed out that Manafort's serving time for nonviolent offenses and said he "has been a model inmate" who would not pose a threat to public safety.

Manafort's legal team said he'd be staying with his wife in a three-bedroom apartment in Virginia during his home confinement. He'll reportedly serve out the remainder of his sentence there. Manafort had previously been due to leave prison in November 2024.