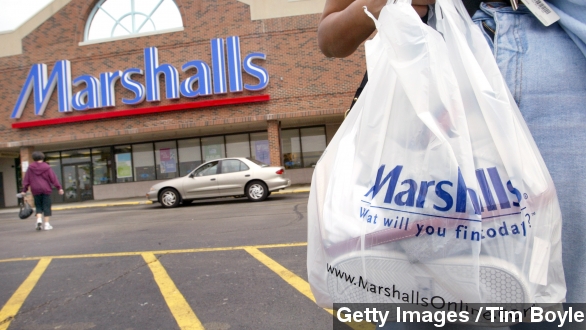 SMS
Man Trapped In Marshalls Store Wall Now Trespassing Suspect
By Cliff Judy
By Cliff Judy
November 12, 2014
Workers at a Colorado department store called 911 after they heard a man's voice inside the store's walls and couldn't find him.
SHOW TRANSCRIPT

Denver got its strange news fix Tuesday when employees inside an area Marshalls store called 911 after hearing a man's voice trapped inside the walls of the store.

Local newspaper Longmont Times-Call had a photographer on scene as firefighters managed to cut through the outside wall of the store and pull a very tired, very cold 35-year-old man into the open air.

MARC STEWART, KMGH REPORTER: "He was trapped in this wall of sorts in the back of this Marshalls department store — stuck here for three days after falling through an opening on the roof."

And that started the careful game of what to call the man.

The vast majority of headlines around the nation played it safe, as they probably should, calling the three-day wall dweller simply a "man."

Our favorite label, though, has to be Fox News' use of "bloke" on Wednesday's morning show.

A sergeant with the Longmont Police Department was a little more blunt with his words, however.

SGT. MATT CAGE, LONGMONT POLICE DEPARTMENT ON KUSA: "We've had burglary suspects that have gotten trapped, but never anything like this."

The Times-Call reports the man, or should we say suspect, has prior property crime convictions on his record and tried to slip "help" notes to employees through store walls.

"One of them was written on his probation officer's business card."

But keep in mind the space the man trapped himself in isn't heated, and the temperature by Tuesday evening's newscasts — only a few hours after the man's rescue — was hovering around 10 degrees. Firefighters said they were grateful to make a rescue, not a recovery. (Video via KMGH)

As a writer for KMGH joked, "If convicted, some of us feel he should get credit for time served."