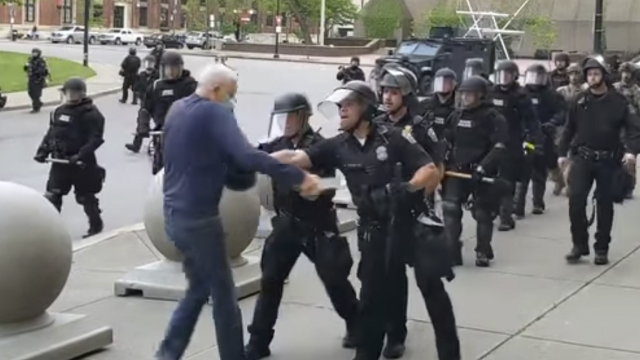 We want to warn you, some of the images in this video are graphic.

A lawyer for Martin Gugino says her client suffered a brain injury when he was pushed by police officers during a protest in Buffalo, New York, earlier this month.

Video of the June 4 incident shows 75-year-old Gugino approached two officers, who then appeared to push him. He fell backward, hit his head on the ground, and started bleeding.

The officers involved — Robert McCabe and Aaron Torgalski — were suspended without pay after the video went viral. They have since been charged with one count of second-degree assault each.

Both men pleaded not guilty. They were released without bail and will appear in court next month. If found guilty, they could face up to seven years in prison.

Gugino has remained hospitalized since the incident and has started physical therapy.

His lawyer told reporters Thursday: "He feels encouraged and uplifted by the outpouring of support which he has received from so many people all over the globe. It helps. He is looking forward to healing and determining what his 'new normal' might look like."