Man Says His McMuffin Made Him A Little McSick 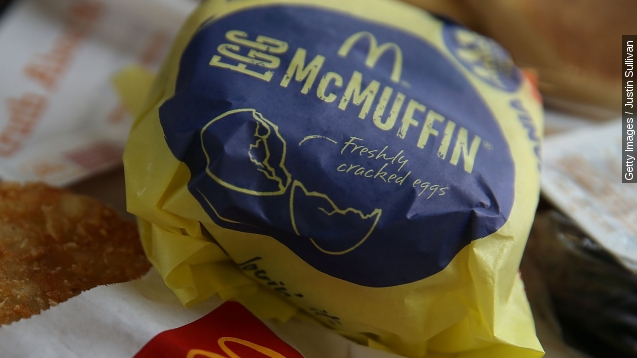 While Americans celebrate all-day breakfast at McDonald's, one man in the U.K. is regretting his latest McMuffin. (Video via McDonald's)

Alan Evans told The Sun he collapsed with food poisoning after he ate a moldy egg on his sandwich. (Video via McDonald's)

Evans said: "I just couldn't stop being sick. ... Now even looking at McDonald's on television just makes me feel sick." He says he was bedridden for five days after eating the sandwich.

The news comes just as the Golden Arches celebrates its highest brand perception in two years. A YouGov poll found 46 percent of adults say they would choose McDonald's for their next meal; that's up 7 points from July.

A McDonald's spokesman said the company is investigating the incident and added, "The eggs used in our McMuffins are made with real, free-range eggs that are freshly cracked in the restaurant every day by our crew." (Video via McDonald's)

Evans told The Sun that Mickey D's offered him a free meal, but something tells me he's probably not cashing that in any time soon. (Video via McDonald's)