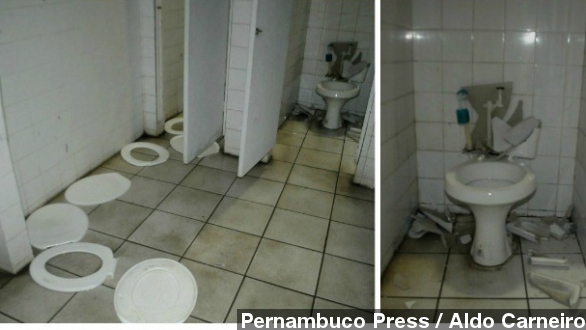 SMS
Man Killed By Toilet Thrown At Brazilian Soccer Match
By Collin Ruane
By Collin Ruane
May 4, 2014
Three other people were hurt when fans from a rival team reportedly threw toilets at people outside the stadium.
SHOW TRANSCRIPT

A man in Brazil is dead after police say rioters threw a toilet bowl at a crowd gathered at a soccer match Friday. It's the latest in a series of safety concerns for Brazil, just one month ahead of the World Cup.

This video was posted on YouTube and reportedly shows the moment a toilet bowl was thrown onto the crowd. Police say it's likely the victim died instantly. (Via YouTube / canalnotadez)

A Brazilian physics professor told a a sports publication the toilet bowl likely came down on the 26-year-old fan with more than 750 pounds of force. (Via Globoesporte)

On top of that, the BBC notes three other people were reportedly hurt as fans from the visiting team threw other toilet bowls from the upper decks in the stadium. Brazil's football association has decided not to hold any more games at the stadium for the time being.

As tragic as this story is, not everyone is surprised. This headline from The Inquisitr reads, "Flying Toilet Bowl Kills Soccer Fan In, You Guessed It, Brazil."

​This latest incident follows a string of violent protests, construction delays and deadly accidents linked to the World Cup preparations — all of which have called into question the country's readiness to host such a large sporting event.

The Telegraph points out many protests in Brazil over the past few months have turned into violent confrontations between protestors and police and that 2013 was one of the most violent years Brazil has had in more than 3 decades.

Police in Brazil went on strike for nearly two months earlier this year because they said they didn't think the country would be safe enough for tourists unless the government gave them more funding and more assistance. (Via France 24)

In an opinion article about the safety of Brazil, a writer for the Daily Mirror says, "Rio can be a violent city — and when I was last in Sao Paulo, I saw a man shot in a stand-off outside the Morumbi shopping mall."

But about a year ago, The Atlantic notes the U.S. State Department put out a map of countries with travel warnings that included countries like Colombia, Mexico, Israel and North Korea.  Brazil was not included in that list, despite having one of the world's highest per capita homicide rates — not to mention the high-profile rape of an American tourist in 2013. (Via Fox News)

Despite the controversy, the World Cup is set to kick off in Rio de Janeiro, Brazil June 12.