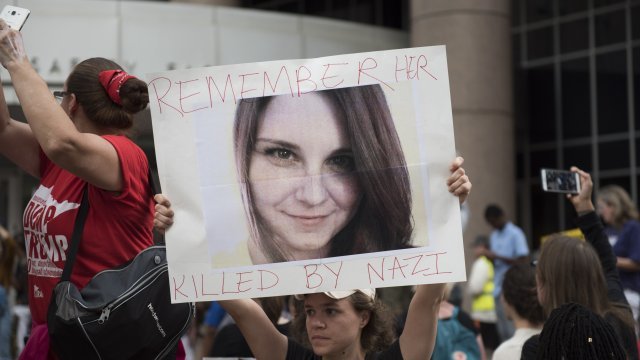 The man accused of driving through a crowd of people protesting a "Unite the Right" rally in Charlottesville, Virginia, has been charged with a hate crime on the federal level.

The incident led to the death of one woman.

The Justice Department announced James Alex Fields Jr. is being charged with one count of a hate crime leading to death, 28 counts of hate crime acts involving an attempt to kill, and one count of racially motivated violent interference with a federally protected activity.

FBI Director Christopher Wray said in a statement: "Hatred and violence have no place in our communities. The investigation of hate crimes is a top priority of the FBI, and we will continue to work with our partners to ensure those who perpetrate such despicable acts are held accountable."

Demonstrators were protesting a rally by white supremacists, nationalists and members of the so-called "alt-right" on Aug. 17 in Charlottesville, when a man drove into them. The rally was to protest the planned removal of a Confederate statue.