Malia Obama Is Heading To Harvard, But First She's Taking A Year Off 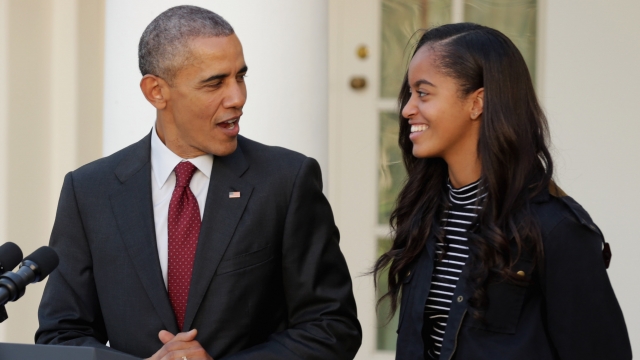 SMS
Malia Obama Is Heading To Harvard, But First She's Taking A Year Off
By Matt Moreno
By Matt Moreno
May 1, 2016
The White House announced Malia's pick for college Sunday but said she'd be taking a year off before attending.
SHOW TRANSCRIPT

Malia Obama is heading to Harvard.

The White House announced Sunday that Barack and Michelle Obama's oldest daughter will attend Harvard University starting in fall 2017. A statement from the White House said she'll be taking a "gap year" before starting school.

As the president's daughter, the 17-year-old high schooler has had quite the pick of potential universities. Malia visited Harvard, Brown, Columbia, Princeton, Penn, Yale and more during the search process.

But rumors started swirling Saturday that she'd picked Harvard when a tabloid obtained a picture of her wearing a Harvard T-shirt at her high school's college signing day.

Harvard is well-known to the Obama household. Both the president and first lady earned law degrees from the Ivy League university.

In the '90s, President Obama even made headlines for becoming the first black president of the Harvard Law Review, the most prestigious in the country.

It's yet to be revealed what Malia plans to do during her year off school, but we're certain moving out of her house on Pennsylvania Avenue will be on the list come November.

This video includes clips from the White House, Harvard University, CBS and images from Ian Lamont / CC BY 2.0 and Getty Images.