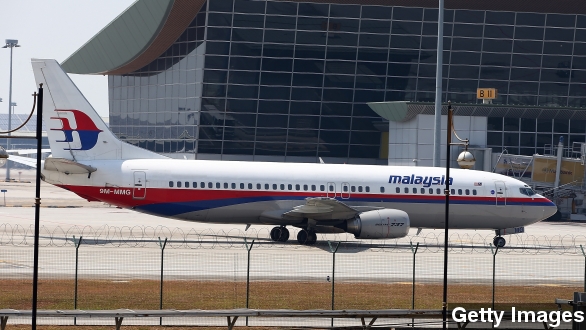 By Cliff Judy
July 29, 2014
Malaysia Airlines says it might consider a new name and brand, but recovering from two of the worst disasters of the year could make the moves moot.
SHOW TRANSCRIPT

Turns out there is such a thing as bad publicity. (Via Getty Images)

Combine one of the more mysterious plane disappearances in years in MH370 with another flight, MH17, seemingly shot down in the middle of what some consider a war zone, and Malaysia Airlines doesn't have much choice in getting itself away from unwanted attention. (Via ABC, YouTube / PainkillerBOH)

Sunday the airline's commercial director told The Telegraph the airline is considering renaming and rebranding itself.

HUGH DUNLEAVY: "There are several options on the table, but all involve creating an airline fit for purpose in what is a new era for us, and other airlines."

But with inarguably two of the worst disasters of the year attached to its name, others wonder if Malaysia Airlines can survive long enough for a rebirth. (Via Travel & Tourism Foundation)

Time points out while the Malaysian government had ambitious plans for the airline and invested heavily in it, the company may now have to deal with fewer passengers, discount ticket prices to keep them or cut out less profitable international flights. (Via Time)

As one Malaysian aviation expert told Time: "It will never get back to the large size it was before. The sooner they accept that fact, the better off they will be." (Via Getty Images)

Despite an exhaustive international search of the Indian Ocean, Malaysia Airlines Flight 370's wreckage hasn't been found. It disappeared in March with more than 200 people on board. (Via CBS)

And finger pointing continues over the crash of Malaysia Airlines Flight 17, but it increasingly appears to have been shot down over Ukraine earlier this month by a surface-to-air missile in the embattled country. That crash killed nearly 300. (Via Getty Images)