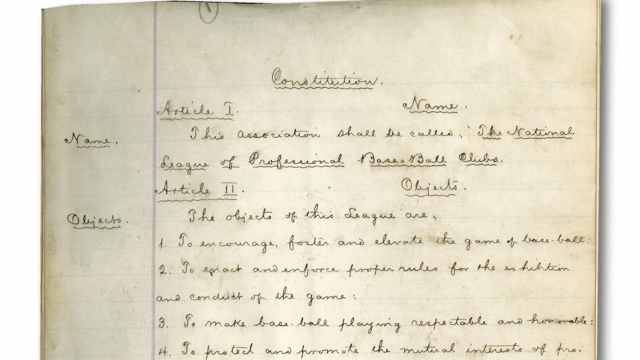 SMS
These Papers Created Professional Baseball As You Know It
By Ryan Biek
By Ryan Biek
May 24, 2017
The National League's founding documents are up for auction, and they may go for millions.
SHOW TRANSCRIPT

The papers that created professional baseball as we know it go up for auction Wednesday. The newly discovered document could fetch a record sum.

SCP Auctions is selling a 74-page artifact that many consider to be Major League Baseball's founding document. It laid out the rules for how a professional league would operate. And at the time, the rules were badly needed.

By the 1870s, the sport was in trouble. The National Association had proven to be a loosely organized league, and teams were dropping out. Gambling and bribery were rampant.

Many Americans thought playing baseball was a dirty way to make a living.

So in 1876, the owner of the Chicago White Stockings called a meeting with other team delegates, and together they lay down the framework for the National League.

The document contains the original rules for how the league's eight teams would operate. The guidelines were designed to make the business more fair and profitable, while also making "base-ball playing respectable and honorable."

The American League was created 25 years later, and soon after, the best teams from each league starting squaring off for the World Series.

Last year, SCP got $3.26 million for the "Laws of Base Ball" –– a document laying out the rules of the game. But the auction house thinks the National League's founding papers could fetch even more.