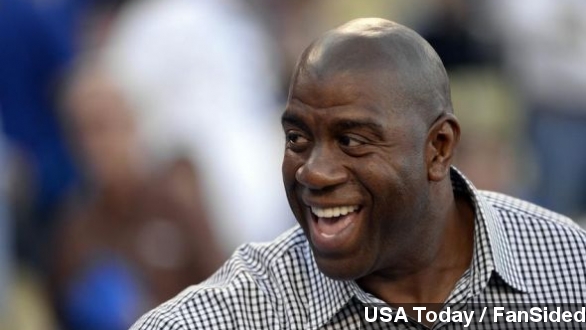 By Danny Matteson
April 28, 2014
According to a new report, Magic Johnson and a group of investors are interested in buying the Clippers, should Donald Sterling be forced to sell.
SHOW TRANSCRIPT

When Magic Johnson discovered Los Angeles Clippers owner Donald Sterling named him while making racist remarks, he vowed to never attend another Clippers game. But here's one way we could see that vow short-lived.

According to a new report from Yahoo Sports' Adrian Wojnarowski, Magic and a group of investors have shown interest in buying the Clippers, should Sterling be forced to sell. One league source reportedly told Yahoo, "Magic's absolutely interested."

Sterling is currently under investigation by the league and NBA Commissioner Adam Silver after TMZ published a recording purportedly of him making racist remarks and asking his girlfriend not to bring black people to Clippers games.

Silver has promised Sterling due process but could also deliver a harsh punishment if the tape turns out to be the genuine article. (Via NBA)

And if that means removing him as the Clippers owner, Johnson and his team are in position to pounce on the opportunity.

Johnson has begun to establish a sports dynasty in LA. He was of course, a Hall of Fame player for the Los Angeles Lakers. (Via Wikimedia Commons / Philipschwalb)

He teamed with investment group Guggenheim Partners to buy the Los Angeles Dodgers for $2.15 billion in 2012 and purchased the WNBA's Los Angeles Sparks earlier this year. (Via CBS, WNBA)

Outside of finances, and despite his connection to the Lakers, though, Wojnarowski thinks Magic may be a perfect fit for the Clippers — and a solution to the league's PR problems surrounding the issue.

He writes: "Magic Johnson is the ultimate cleanser in sports, and steering a Clippers sale to him could be transformative for the franchise. Truth be told, it could change the balance of basketball power in Los Angeles forever." (Via Yahoo)

Pressure has mounted on Sterling in recent days — with everyone from President Obama to Michael Jordan to Al Sharpton speaking out on the issue. (Via Sports Illustrated, USA Today, WebProNews)

As Bloomberg reports, Sharpton has even targeted the NBA's business partners over the controversy, saying:

‘"You're dealing with major corporations that have stockholders … that don't want to have their business complicated on why they're investing in a business with a guy who would say something like this."

Some of those corporations have reportedly already started to flee, including the company behind those Chris and Cliff Paul commercials — State Farm.

On ESPN's "The Herd" Monday Morning:

COLIN COWHERD: "So State Farm, officially, this morning is pulling out of the Clippers?"

STEVE STOUTE: "State Farm is pulling out, and other brands are pulling out, yeah. I think you're going to start seeing it over the next 48 hours."

According to the Los Angeles Times, NBA Commissioner Adam Silver is expected to rule on the authenticity of the Sterling recording by Tuesday. It notes the league will likely hand Sterling a fine and/or suspension.