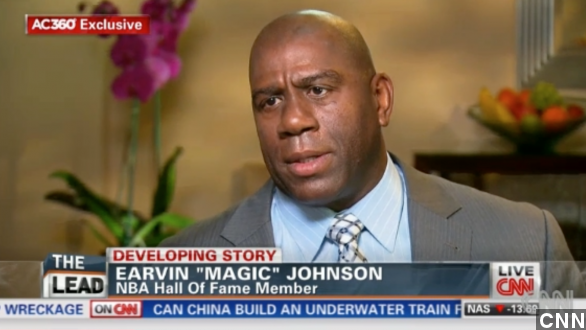 By Christian Bryant
May 13, 2014
Magic Johnson told CNN's Anderson Cooper he feels sorry for Clippers owner Donald Sterling and that Sterling's insults about him were upsetting.
SHOW TRANSCRIPT

Earvin "Magic" Johnson, the subject of criticism from L.A. Clippers owner Donald Sterling both in a taped phone call and follow-up interview, sat down with CNN's Anderson Cooper to give his take on Sterling's negative comments.

Johnson addressed a number of insults from Sterling made during a previous interview with Cooper in which the Clippers owner said Johnson should not be a role model. Sterling also said Johnson should be ashamed of his "AIDS" diagnosis and Sterling questioned Johnson's work off the court, asking "What does he do?"

For those that don't know, Johnson announced during a press conference in 1991 that he was HIV positive — he does not have AIDS — and that he was retiring from basketball to concentrate on his health. (Via ABC)

Since then, Johnson has established himself as an entrepreneur and a philanthropist — he has founded Magic Johnson Enterprises and the Magic Johnson Foundation, which is aimed at HIV/AIDS prevention, scholarship and community outreach.

During his interview, Johnson also tried to clear up an allegation from Sterling. The Clippers owner told Cooper he received a call from Johnson and was told to stay quiet rather than apologize publicly. Sterling said that was a part of a larger effort for Johnson to try and purchase the Clippers.

Johnson disputed that claim, saying Sterling called him and asked to appear beside him in an interview with ABC's Barbara Walters. Johnson said he declined the offer and told Sterling to apologize publicly. (Via ESPN)

Johnson also told Cooper if there was any team he would want to buy, it would be his former squad — the L.A. Lakers.