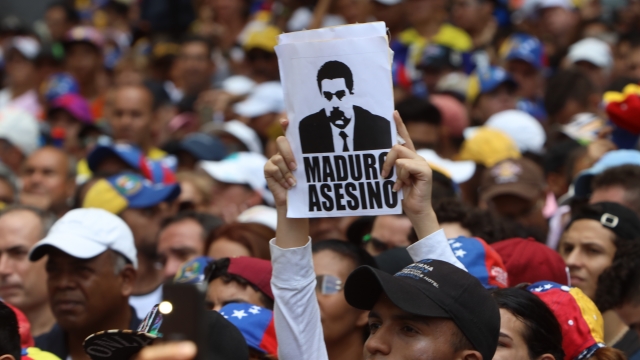 Venezuela's Nicolás Maduro appears to be tightening his hold on power, months after opposition leader Juan Guaidó declared himself the country's rightful president and streets filled with anti-government protesters.

Maduro is still residing in the presidential palace, as Guaidó's movement shows signs of fraying. That is posing challenges for the Trump administration, which confidently bet on Maduro's downfall.

While the foundation for potential charges is unclear, Venezuela's chief prosecutor claims the lawmakers had conspired to seize military installations, with a goal of "destabilizing this Christmas." Additionally, Guaidó, who is president of the National Assembly, faces a vote Jan. 5 on keeping his leadership post.

Maduro, Venezuela's socialist leader, won a second-six year presidential term in 2018, despite widespread allegations of election fraud. Guaidó, who wasn't a candidate, later used a constitutional provision to declare himself president in January.

Last April, Guaidó moved to take power. He appeared at a Caracas military base, urging an uprising against the Maduro regime. Tens of thousands of Venezuelans poured into the streets, with Guaidó cheered on by the Trump administration. Maduro accused the U.S. of waging war on his country. The Venezuelan military stuck with him.

The Trump administration has imposed sanctions on the Maduro government. And The Washington Post quoting anonymous sources, reports that the U.S. is studying a potential blockade of Venezuelan oil exports to Cuba. Bloomberg News reports that military options aren't under consideration.

Amid the turmoil in Venezuela, the population has faced significant food shortages. The country's economic crisis only recently showed signs of easing. People are leaving in huge numbers. By the end of 2019, as many as 4.5 million - 15 percent of the population - are expected to have fled the country.