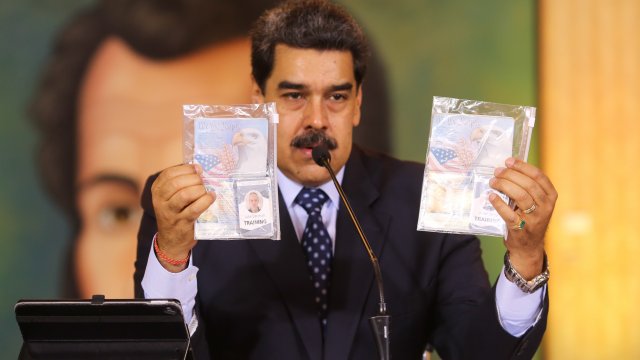 "I, I, I was helping Venezuelans take back control of their country."

Venezuelan President Nicolás Maduro claims the edited interrogation video, released Wednesday, is a "confession" to a plot against him, carried out by armed mercenaries from the U.S. and Colombia.

It's the latest twist in a bizarre story that has unfolded since Sunday. That's when Denman and a fellow Green Beret named Airan Berry were arrested, along with 11 others, after an apparent armed incursion into Venezuela.

Jordan Goudreau, the owner of a Florida security company, and another retired Green Beret claimed credit in this Twitter video for an ongoing military campaign.

"At 1700 hours, a daring amphibious raid was launched from the border of Colombia deep into the heart of Caracas. Our men are continuing to fight right now."

The Washington Post on Wednesday reported that Goudreau hatched the rogue operation after he met in Miami with associates of Venezuelan opposition leader Juan Guaidó.

But Guaidó's political strategist told The Post that his team wanted nothing to do with Goudreau and cut him off after he demanded a  $1.5 million retainer.

Denman said in the Venezuelan state video that he expected to be paid $50,000 to $100,000. Under questioning, he said the plan was to secure an airport to fly a captured Maduro to the U.S.

The U.S. Justice Department has indicted Maduro on drug trafficking charges and offered a $15 million reward for information leading to his arrest or conviction.

On Wednesday, Maduro claimed President Donald Trump was "the direct chief of this invasion." But President Trump, shown here hosting Juan Guaidó at the White House early last year, says the U.S. government had no knowledge or involvement in what happened in Venezuela.