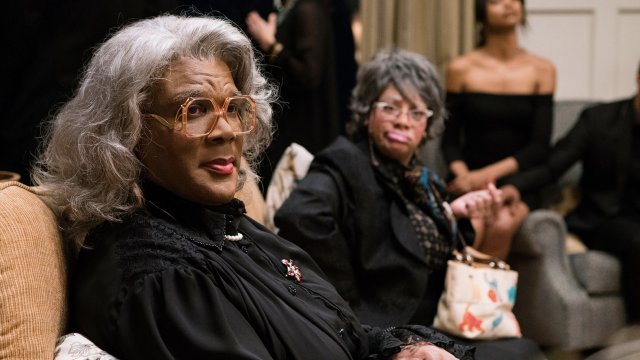 SMS
'Madea Family Funeral' Gets $27M Debut In Character's Final Bow
By Jamal Andress
By Jamal Andress
March 4, 2019
Since Madea first appeard on the silver screen in 2005, she's starred in eight different movies that ultimately brought in half a billion dollars.
SHOW TRANSCRIPT

Taking the No. 2 spot in its debut weekend is "A Madea Family Funeral" bringing in a better than expected $27 million in its first weekend out. That's the fourth best debut in the Madea franchise — right behind "Boo! A Madea Halloween"

This is reportedly the last time we'll see Madea on the silver screen which is sad for some but in all fairness she's been around quite a while.

Madea made her feature film debut back in 2005 with "Diary of a Mad Black Woman." Since then, she's starred in eight different movies that ultimately brought in half a billion dollars ($502M).

Not only that, but Madea made a fortune on the stage before ever entering a movie theater. Tyler Perry reportedly made $100 million in stage play ticket sales before "Diary of a Mad Black Woman" even premiered.

Now, more than a decade later, Madea and Tyler Perry are still a force to be reckoned with at the box office — despite the films themselves not being very good.

And finally at No. 3 this week is "Alita: Battle Angel" bringing in an estimated $7 million in its third week out.

As for next week, Samuel L. Jackson with hair! Oh and some really awesome superhero.