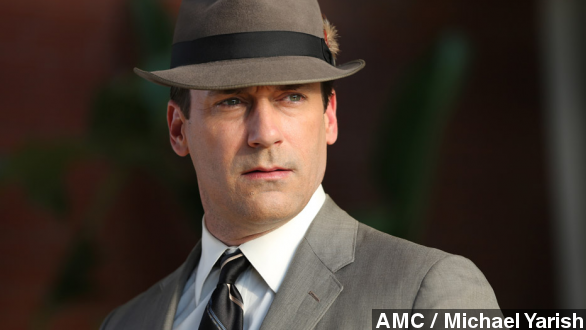 SMS
Mad Men's Final Season: Is It TV's Greatest Drama Series?
By John O'Connor
By John O'Connor
April 13, 2014
It's the beginning of the end for AMC's "Mad Men," a show setting out on its seventh and final season.
SHOW TRANSCRIPT

It's the beginning of the end for AMC's Mad Men, a show now embarking on its seventh and final season.

The 60's period drama returns Sunday for its highly anticipated final chapter, and the question on the minds of fans is: Will ad man Don Draper finally find inner-peace, or continue his downward spiral? (Via AMC / Mad Men)

Show creator Matthew Weiner announced months ago season seven of Mad Men would be divided over two years, with seven episodes airing this year and seven airing next year.

Many critics believe the move will give the critically acclaimed show a better opportunity to carve out its place in television history.

However, that streak was between 2008-2010 — Mad Men's first three seasons. The show has failed to make the short list for best drama series since 2011.

And the last season of Mad Men was considered by many critics to be the weakest of the series.

New York Magazine's Matt Zoller penned for Vulture that the season fell flat, calling it "sluggish and lumpy and unfocused." While Slate's Hanna Rosin described it as "strange .. in that it seemed to throw up intriguing plot possibilities and then grow quickly bored with them."

Aside from a lack-luster previous season, Mad Men may find difficultly finding its stride to pick up that elusive record-breaking fourth Golden Globe.

Its list of challengers could likely include big rating-getters like Game of Thrones and Downton Abbey, both of which more than doubled Mad Men's viewership last season.

But while Mad Men has never enjoyed mammoth ratings, its cultural impact is undeniably huge.

CNN explains it's rare that a show becomes shorthand for an era in history, but that Mad Men has truly become synonymous with the 1960's. Following the show's release:

"Banana Republic and Brooks Brothers introduced 'Mad Men'-inspired fashion lines, the name 'Betty' became popular again" and when President Obama name dropped the show in the 2014 State of the union address, "nobody had to ask what he meant."

You can catch the first half of Mad Men's final season on AMC Sunday at 10 p.m. ET.