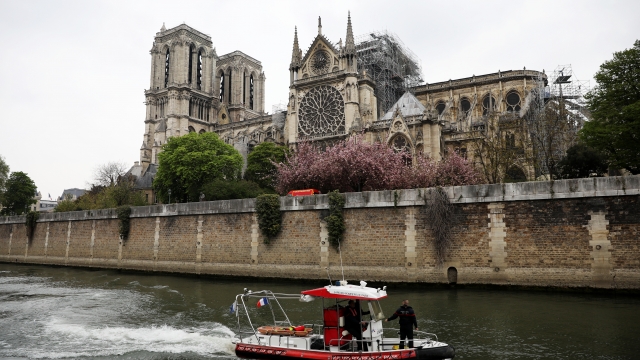 French President Emmanuel Macron said in a nationwide address Tuesday that he wants Notre Dame Cathedral in Paris to be rebuilt within five years.

His statement came as hundreds of millions of dollars are pouring in to help rebuild the cathedral, which was engulfed in flames earlier this week. As of Wednesday morning, at least $995 million had already been raised for the reconstruction efforts. The donations have come from both everyday people and the extremely wealthy.

Notre Dame, which is more than 800 years old, was in the middle of a $6.8 million renovation project when it caught fire Monday evening local time.

Officials are in the middle of assessing the damage. While the cathedral's spire and roof collapsed, the two towers and main shell are still intact.  Still, some think Macron's five-year timeline is unrealistic, saying it could take decades to completely restore Notre Dame.

The Paris prosecutors' office said it's ruled out arson and terror-related motives and will be investigating the fire as an accident. On Tuesday, investigators began questioning construction workers who were involved with the cathedral's renovations.