Macron Says US Will Rejoin The Paris Climate Accord 'One Day' 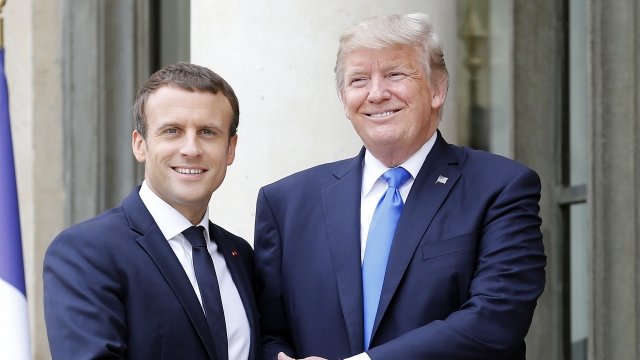 SMS
Macron Says US Will Rejoin The Paris Climate Accord 'One Day'
By Gabrielle Ware
By Gabrielle Ware
April 25, 2018
Macron stuck firm to his views on climate change Wednesday, even though they differ from Trump's agenda.
SHOW TRANSCRIPT

French President Emmanuel Macron addressed a joint session of Congress on Wednesday. Some of that speech was dedicated to highlighting the long-term effects of climate change.

"I'm sure one day the United States will come back and join the Paris agreement," he said.

Macron said the effects of CO2 emissions and ocean pollution are killing the planet and disagreements on how to face the issues are short-term. Congress had an overwhelmingly positive response to his views that largely oppose those held by President Trump.

Macron and Trump appear to have a warm relationship, some going as far as to call him the "Trump whisperer."

Macron also encouraged the U.S. not to withdraw from the Iran nuclear deal.