For Merkel And Macron, Nationalism Has A Dark History 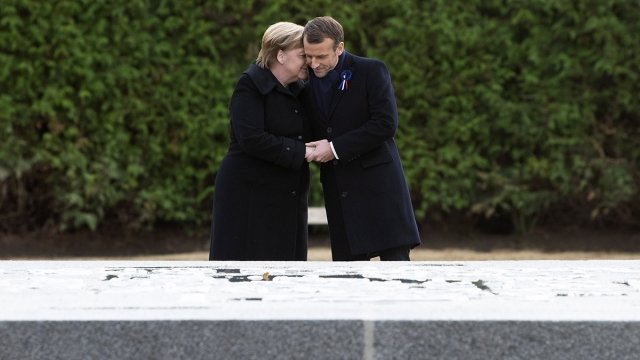 SMS
For Merkel And Macron, Nationalism Has A Dark History

By Matt Picht
November 12, 2018
The leaders of France and Germany called for more global cooperation during the commemoration of the 100th anniversary of the end of World War I.
SHOW TRANSCRIPT

The international ceremony this weekend in Paris held to commemorate the end of World War I also came with a clear message — nationalism can be destructive.

French President Emmanuel Macron joined with German Chancellor Angela Merkel to caution the world against retreating from multilateralism, warning a rejection of global cooperation risks a repeat of the same errors that lead to World War I.

Macron said, "By saying 'Our interests first, who cares about the others,' we erase what a nation holds dearest, what gives it life, what makes it great, and what makes it essential: its moral values."

Nationalism was hardly the only factor that started World War I, but it definitely fueled the conflict. Countries leaned on nationalistic images in propaganda to bolster public support for the war.

And nationalism helped dismantle postwar attempts towards global cooperation. President Woodrow Wilson's ambitious plan for a League of Nations was shot down by isolationists in Congress; its collapse set the stage for the breakout of World War II.

Now, President Trump has brought nationalism back in fashion: his "America First" agenda has pulled the U.S. out of several international agreements, while far-right nationalist parties have been winning support and making gains in elections across Europe — including in France and Germany.

Merkel and Macron often position themselves as defenders of international order against the nationalist tide. But it's not clear how much leverage they can bring to bear: Merkel recently announced she'd step down from leading her political party, while Macron's poll numbers back home are at rock bottom.