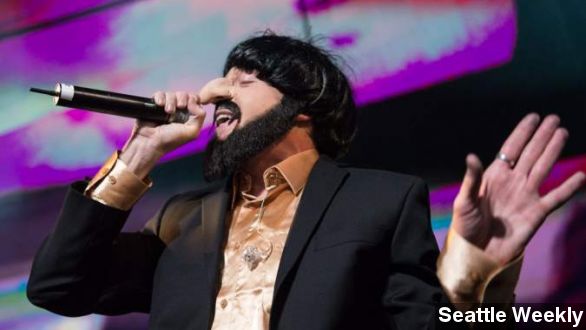 This weekend Macklemore and Ryan Lewis surprised fans in their hometown of Seattle by performing at the Experience Music Project Museum.

"The rap duo was there for the kickoff party of the new exhibit 'Spectacle: The Music Video.' That exhibit focuses on how video didn't actually kill the radio star but instead became a whole new and very important aspect of contemporary music." (Via KING)

So here's footage of the performance — can you spot the rapper? Probably not, but he's there on the right of your screen in full costume. (Via YouTube / TopHipHop24/7)

He donned a wig, beard and a big fake nose — leading to headlines like these, wondering if Macklemore crossed a line into anti-Semitism. (Via The Jerusalem Post, Bustle)

But The Daily Dot went straight to pointing fingers, saying, "He opted to perform dressed as some kind of Jewish caricature, prosthetic schnozz included."

The outlet even asked Twitter users, "Why did Macklemore perform a secret show in Jew-face?" (Via Twitter / @dailydot)

But as AllHipHop points out, when it comes to the fans, most of the backlash came after the concert. "Most in attendance didn't seem offended, as there was no visceral response from the crowd. Most people that felt emotionally about the performance expressed it on social media."

That's the truth — Twitter just about went up in flames.

For the record, Macklemore is not Jewish, and once he realized he was the talk of the town, the rapper hopped on his own Twitter account to try to smooth things over.

"A fake witches nose, wig, and beard = random costume. Not my idea of a stereotype of anybody." (Via Twitter / @Macklemore)

And a writer for Seattle Weekly didn't seem to see anything odd with the getup either, chalking it up to an attempt to keep from getting "mobbed." After all, he was a surprise guest.

Regardless of what the intention was, Macklemore and Ryan Lewis have another show coming up on May 25 in Las Vegas. And as Billboard puts it, "It's a safe bet that his new costume will not be joining the duo on the road."