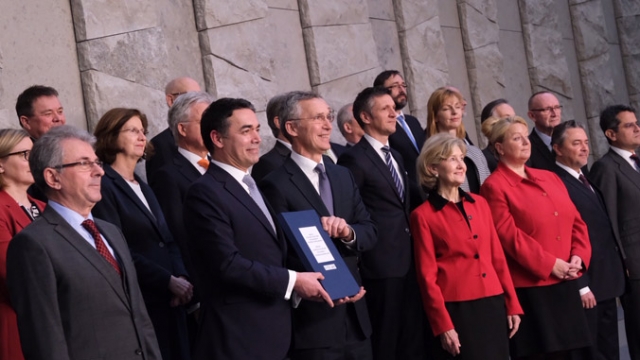 After an almost three-decade long standoff, Macedonia is taking steps to be part of NATO. The country and all 29 of the bloc's members signed what's called the Accession Protocol.

The newly renamed Republic of North Macedonia — we'll touch on that in a bit — will now be able to attend NATO activities as an invitee. From here, all of NATO's members will have to ratify the accord "according to national procedures."

Once everything is confirmed, Macedonia will finally become a member of the alliance. The bloc's Secretary General Jens Stoltenberg said he "look[s] forward to the day when 30 flags will fly outside NATO HQ."

Macedonia has been trying to become part of that alliance and the European Union for years, but Greece has continually vetoed the country's attempts to join. It said Macedonia's name indicated a territorial claim to a northern Greek territory of the same name.

Last fall, Macedonia held a name-change referendum in an attempt to get around that debate, but the vote failed. So, at the beginning of this year, Macedonia's parliament voted in favor of amending the country's constitution to change its name to the Republic of North Macedonia.

And shortly after that, Greece's parliament approved a deal to rename Macedonia, giving it the green light to join NATO and the European Union.