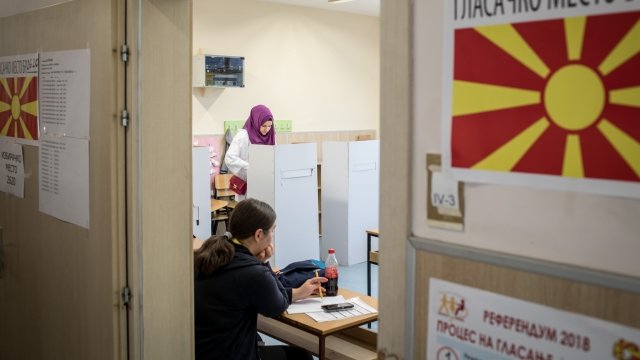 Macedonia's name-change referendum has failed. Not enough people voted on Sunday to accept a deal that would change the country's name to North Macedonia.

Macedonia has been trying to resolve a dispute over its name so it can join NATO and the European Union. Greece has vetoed Macedonia's attempts to join the entities for years. It says Macedonia's name indicates a territorial claim to a northern Greek territory of the same name.

But law states that in order for the name change to happen, 50 percent of voters plus one person had to cast a ballot. Preliminary results show that just over a third of Macedonians actually did that, though 90 percent of votes cast were in favor of the change.

Voters were asked: "Are you in favor of membership in NATO and the European Union by accepting the deal between the Republic of Macedonia and Republic of Greece?"

Russia opposed the referendum, saying Macedonia could become a target if Russia-NATO relations don't improve. Critics have accused Russia of trying to influence the Macedonian vote, but Russia denies any meddling.

So now what? Macedonia's prime minister says he'll move forward with plans to change the country's name anyway by sending it to parliament. To get it passed there, he'll need support from two-thirds of MPs. He's threatened calling early elections if they don't support it.