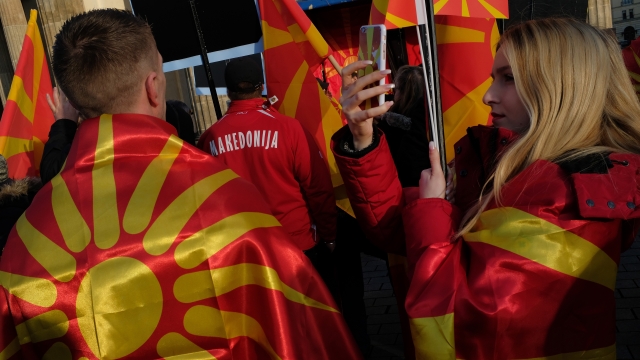 SMS
Macedonia Officially Changes Name To North Macedonia
By Ahmed Jawadi
By Ahmed Jawadi
February 13, 2019
The change hopefully marks an end to a more than two-decade dispute with Greece over the name.
SHOW TRANSCRIPT

As of Tuesday, the country of Macedonia is no more — it will now officially be known as North Macedonia.

This comes after years of contention over the country's name. Why? It all started in 1991, when the former socialist state gained independence from Yugoslavia and decided to call itself the Republic of Macedonia, or just Macedonia. But Greece's northern region that borders the former Republic of Macedonia is also called Macedonia — and Greece wasn't too happy with the name-change. The two countries have been feuding ever since, with Greece going so far as blocking Macedonia from joining NATO and the EU.

To settle the dispute, Macedonia held a vote last year to change its name to the Republic of North Macedonia. And although 90 percent of votes cast were in favor of the change, it failed due to low voter turnout. The decision went to Macedonia's parliament, which approved the new name earlier this year. Greece gave the new name its blessing shortly after, giving Northern Macedonia the green light to join NATO and the EU.