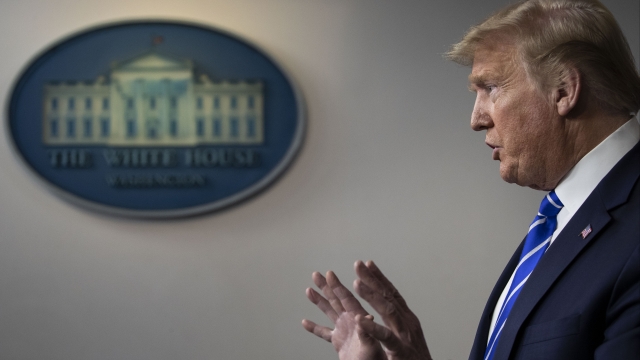 SMS
Lysol Warns Against Ingesting Disinfectant After President's Comments
By Meg Hilling
By Meg Hilling
April 24, 2020
President Trump speculated about the use of disinfectant as possible treatment for COVID-19.
SHOW TRANSCRIPT

The manufacturer of Lysol is warning people not to administer its products into the human body in order to treat COVID-19.

The company placed the warning on its website Friday, writing, "As a global leader in health and hygiene products, we must be clear that under no circumstance should our disinfectant products be administered into the human body (through injection, ingestion or any other route)."

Medical experts warn that ingestion of these products could cause serious health issues.

"I think it's important to remember that the reason these disinfectants and things kill viruses and bacteria so well is because they're caustic chemicals. But those chemicals don't know the difference between what's a virus or bacteria, or a bad living thing, and a good living thing, like growing cells. And so they cause the same kind of damage to us and ourselves as they do to the viruses and bacteria," Dr. Michael Lynch, medical director of the Pittsburgh Poison Center at UPMC, said.

The warning follows comments from President Trump, who speculated about the use of heat and light exposure, as well as disinfectant, as possible treatments for the virus.

"And then I see the disinfectant, where it knocks it out in a minute. One minute. And is there a way we can do something like that, by injection inside or almost a cleaning. Because, you see, it gets in the lungs, and it does a tremendous number on the lungs. So it would be interesting to check that. So that, you're going to have to use medical doctors with. But it sounds, it sounds interesting to me," President Trump said.

President Trump backtracked on his comment Friday, telling reporters, "I was asking a question sarcastically to reporters like you just to see what would happen."

A recent report from the Centers for Disease Control and Prevention says calls to poison control centers have been on the rise. Calls about exposure to cleaners are up 20% over last year, and calls about disinfectant exposure are up 16%.

The agency notes that while the data does not provide information showing a definite link between the spike in exposures and the outbreak, "there appears to be a clear temporal association with increased use of these products."

According to Lynch, one of the most common calls regarding disinfectant poisoning is hand sanitizer.

"We've seen a lot of our increases and exposures to hand sanitizers, which are really strong alcohol-based. And again, it's really important that we have access to it, that we use it, but particularly in children who are accessing it and getting some in their mouth, which can cause burning and irritation, or even drinking a really small amount — because there's so much alcohol, it's really high-proof, it can cause severe stomach upset and intoxication."

In response to these numbers, the U.S. Department of Health and Human Services has decided to award about $5 million to poison control centers across the country to assist with the increase in calls during the outbreak.

According to the Associated Press, a new survey found that only 28% of Americans say they are regularly getting information on the virus from President Trump and only 23% say they have high levels in trust in what he is saying.