Brazil's Lula To Register As Presidential Candidate From Jail 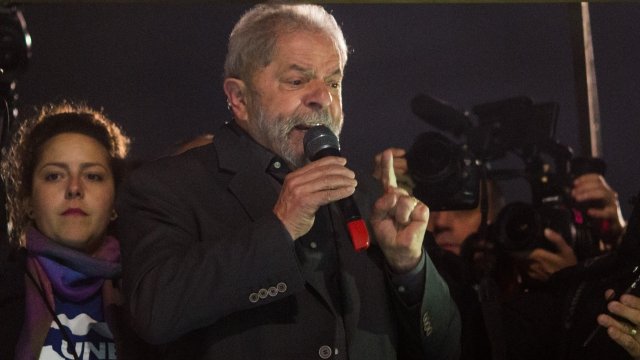 Former Brazilian President Luiz Inácio Lula da Silva is going to register as a presidential candidate... from jail. That's according to Reuters.

"Lula" is serving 12 years for a corruption conviction. Officials from Lula's Workers Party told Reuters they are planning a march to register him with electoral officials before the deadline on Wednesday.

But that may not work out the way they want it to. Brazilian law prevents people whose convictions have been upheld on appeal from running for office. That's Lula's situation right now.

In July 2017, a federal judge convicted Lula for corruption and money laundering after he accepted a bribe in the form of a beachfront apartment.

Lula has consistently denied any wrongdoing and appealed the decision. He says the conviction is meant to keep him from running for president this fall.

Despite being in jail since April, Lula reportedly leads election polls.

The Workers Party told Reuters it plans to use all possible appeals to delay a final ruling on Lula's registration.

And just in case, Lula has reportedly chosen his replacement presidential candidate if he is actually barred from the race.