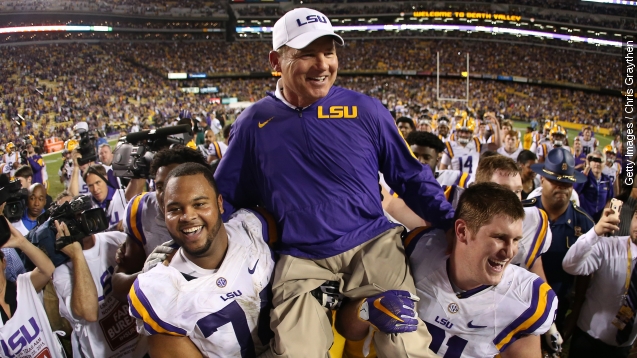 Saturday was reportedly supposed to be Les Miles' last game as head coach for the LSU Tigers.

But boy have things changed in the last week or so. A win against Texas A&M to snap LSU's three-game losing streak and it looks like the school's second-winningest coach in football history is sticking around. (Video via The Daily Reveille)

"It's nice to be the head coach at LSU," Miles said after the game.

Miles' week leading up to the game involved rumors about boosters willing to give $15 million to buy him out, rumors so strong Miles reportedly told a group of boosters that Saturday's game was going to be his last. He later denied saying that though.

ESPN's Joe Schad said a couple factors were behind LSU’s decision to keep Miles around. First, firing him would have risked public backlash. And second, a $15 million buyout from private donors would have been needed to send him packing - not a good look for a school that still wants to receive public money.

Another likely factor is LSU's incoming recruiting class. By many accounts, the Tigers have a top three recruiting class coming in next year and, if you were to get rid of the head coach and his staff who recruited these high schoolers, the nation's top recruits could look elsewhere.

The Tigers finished 8-3 on the regular season and are now slated to receive a decent bowl game bid with Miles still very much intact.

Correction: A previous version of this video misstated that the LSU Tigers' regular season record was 7-3. They finished 8-3. The video has been updated.